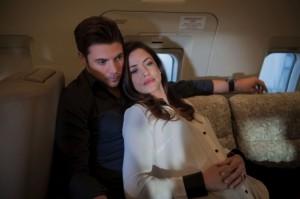 This week on TVHackr, we talked about the latest addition to the Homeland writing staff, when to expect a return to Dallas, and a renewal for Witches of East End, while the internet touched on Iranian TV, the 50th anniversary of JFK’s assassination, and how television has impacted Christmas music.

Betrayal 1.08 Preview: Jack and Sara Deal with Their New Family Dynamics
On the most recent episode of Betrayal, Jack and Sara dealt with their affair being exposed, while TJ becomes reckless after what happened to Brandy.

Ravenswood Midseason Finale Sneak Peeks: Is Miranda in Danger?
On the midseason finale of Ravenswood, Caleb sensed that Miranda was in danger, while Remy uncovered a major clue and a dangerous connection was revealed.

Castle Review: “Disciple”
When Castle and Beckett investigate a murder in which the victim resembles Lanie, the team believes that the members of the 12th Precinct at the next targets.

Russell T. Davies to explore gay life with Channel 4 shows
Queer as Folk creator Russell T. Davies has two new gay-themed series in development – Cucumber, about a 40-something man and his boyfriend, and Banana, which will focus on many different shades of gay love/life.

ABC Announces Midseason Premiere Dates, Time Change for Revenge
Among the moves ABC made for midseason are pushing Revenge back an hour, moving Suburgatory back to 8:30, and splitting Tuesdays at 10:00 between two dramas.

FX Orders Drama Series The Strain, Sets a July Debut
FX has ordered a 13-episode first season of The Strain, a series based on a trilogy of vampire novels from director Guillermo del Toro.

The Tomorrow People 1.07 Sneak Peek: Has Stephen Become a Liability?
On the most recent episode of The Tomorrow People, John sensed a tension between himself and Cara, while Stephen had a moment of clarity regarding his father.

Witches of East End 1.08 Preview: Wendy Discovers Joanna Hid the Key
On the next episode of Witches of East End, Wendy finds out that Joanna buried the key, while Ingrid suspects that Mike has ulterior motives and the shifter targets Freya.

Ravenswood Winter Premiere Preview: Eternity is Right Now
On the winter premiere of Ravenswood, Caleb deals with his encounter with Miranda on the other side and the group’s progress in unraveling the mystery gets derailed by Dillon.

Showrunner Shonda Rhimes to release memoir in 2015
Grey’s Anatomy and Scandal creator Shonda Rhimes has signed a book deal that will see a memoir published in 2015.

FOX Announces Midseason Schedule Changes
Among the changes to FOX’s midseason schedule are a move for Glee, a hiatus for The Mindy Project, and a special airing of The Following.

How I Met Your Mother 9.10 Review – Mom and Dad
While Barney wants to see his parents back together, Ted is blamed for the mess-up of a wedding-related duty.

Starz Drama Power Begins Production, Adds to Cast
Crime drama Power, about a nightclub owner whose other life is as the kingpin of a drug ring, has began production in New York.

Reign 1.07 Preview: The Castle Comes Under Siege
On the next episode of Reign, the castle comes under siege and Francis is taken hostage, while Diane tells Bash of her plan to have him declare legitimate.

How Live TV Helped America Mourn The Loss Of JFK (NPR)
NPR’s Fresh Air takes a look at how live television made it possible for the United States to mourn the assassination of JFK.

Iran’s state TV tries ‘soft power’ to win hearts and minds (The Guardian)
The Islamic Republic of Iran Broadcasting has expended vast financial resources to compete with Persian-language satellite programs beamed into the country from abroad.

The World’s Most Jaw-Dropping Reality TV Shows (Foreign Policy)
Foreign Policy brings you several reality television series from around the world that are different from what people think of when they hear the term “reality TV”.

For So Long Deemed So Lowly, Television Is Now Officially an Artform (PopMatters)
PopMatters reviews How to Watch Television by Jason Mittell and Ethan Thompson, a book that was released this past August.