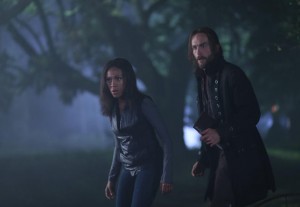 Ichabod and Abbie managed to reunite after being incapacitated by Jeremy, with the former using his knowledge of science to free himself from the coffin and the latter getting some necessary advice from Brooks on how to handle purgatory. However, just because the two are now mobile in the outside world doesn’t mean that they’re in an overly advantageous position against the Horseman, not when two members of their team are still up against the wall. As Irving’s legal position might not be easily amended, their focus has now shifted to the more high priority target: Katrina, who is still trapped in a carriage house overseen by Abraham.

On the next episode of Sleepy Hollow, Abbie and Ichabod come up with a way to free Katrina from her confinement, as they resurrect a Frankenstein-like creation of Ben Franklin in order to fight the Horseman. It’s quick a risky gambit, seeing as how they don’t have a back-up plan should the creature lose, but they have to think outside the box if they have any hope of freeing Katrina and getting a much needed victory against both Jeremy and the Horseman. Not only would securing Katrina give both Abbie and Ichabod the moral victory that they need to keep going, her powers would become quite the weapon in the fight against the Horseman, allowing the team the type of latitude they didn’t have while she was in purgatory.

Elsewhere on Sleepy Hollow, Irving reveals what really happened during his encounter with the demon, thereby causing himself even more problems, while Jenny finds herself at odds with the new sheriff of Sleepy Hollow.

Will Crane and Abbie be able to rescue Katrina from the carriage house, even with Jeremy and Abraham knowing that they’re coming? What will it take to convince those in charge that Irving didn’t murder anyone? How will Jenny’s relationship with the new Sleepy Hollow sheriff develop over the course of this season?