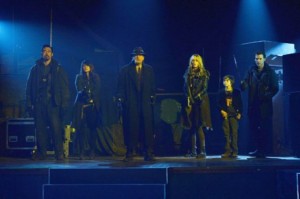 Now that the group has been forced out of the pawn shop due to Eichhorst, they have absolutely nothing left to lose. They managed to make progress while hiding out from the rest of the world, with Eph getting something of a message out to those lingering by their television in the dead of night, but their sense of security is gone following the attack, replaced by an urgency to find a new dwelling and a desperation to strike back. If they don’t retaliate, they risk letting Eichhorst and The Master run right over them and seeing as how they’re the last line of defense against the strain, they’ve got to do what they can in order to do some damage.

On the season finale of The Strain, Eph and Fet stage an all-out assault against The Master in hopes of either driving him out of his lair and toward a trap or surprising him in his lair and taking him out there. While the group doesn’t have much in the way of resources and manpower, they have the advantages of daytime and critical thinking, as they can outsmart these creatures and use what advantages they do have to help them save the world. Yet heading into a situation like this is dangerous in and of itself, so even if Fet and Eph manage to get the jump on The Master and do some damage to his legion of strigoi, they still have to find a way to get out of the lair without incurring any injuries and further debilitating their already small band of warriors.

Elsewhere on The Strain, Gus aligns himself with a strange new force in a bid for survival in a dangerous world.

The season finale of The Strain airs tonight at 10:00 on FX.