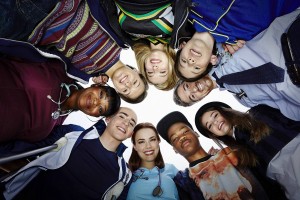 Though the excitement of the annual avalanche of premieres in September and October has long passed, there’s another type of television thrill associated with November – back orders. Yes, some shows are successful enough to get their extensions earlier in the season, while others didn’t see November, let alone give themselves a chance to get an order in November, but there are still several shows awaiting news of their fate. With production on each charging hard toward unlucky episode 13, the last in every new fall show’s initial order, networks will have to decide which projects they’re confident enough to stick with, which they think they’re better off without, and what their schedule will look like as a result of every pickup and every fatality.

Below are the five new fall shows that have yet to receive word either way as to their status on the network. Included are the date they premiered, how many episodes they’ve aired to this point, where they’re produced (a sometimes crucial aspect of pickups and cancellations), what shows they essentially replaced, and whether TVHackr thinks they’ll be continuing on past episode 13.

Constantine (NBC)
Premiered: Friday, October 24th
Episodes Aired: 3
Production Studio: Warner Bros. Television
Previous Time Slot Occupants: Dracula (fall), Hannibal (winter/spring)
Will It Get More Episodes?: Yes. As long as Constantine manages to stay within a couple tenths of Grimm and keep itself above the 1.0 demographic line, I don’t see a reason why NBC wouldn’t give it some type of extension. Given the time slot, the show’s genre, and the lack of wide-reaching brand awareness, NBC couldn’t have been expecting Constantine to break out or build off of its lead-in, not when its first two weeks coincided with the World Series and Halloween. Even though the show is hurt by being an outside production vs. a co-production like Dracula or a NBCUniversal production like Grimm, Constantine is still NBC’s best, most reasonable option for the time being, especially with Grimm weaker than usual and the rest of the week in more pressing need of repair. With Hannibal said to not be ready until at least April, look for 18-ish episodes of Constantine, with possibly more if they want to confine Hannibal to summer.

Cristela (ABC)
Premiered: Friday, October 10th
Episodes Aired: 5
Production Studio: 20th Century Fox Television
Previous Time Slot Occupant: The Neighbors
Will It Get More Episodes?: Yes. The only way that Cristela doesn’t get some type of extension is if ABC decides to get rid of the Friday comedy bloc before slotting Shark Tank spin-off Behind the Tank at 8:00 this spring. The network would then end Cristela after its initial 13 episodes before doubling up on Last Man Standing originals and getting it off the schedule by March, a similar decision to ABC’s shortening Last Man Standing and Malibu Country to 18 episodes before using Fridays for Happy Endings burn-off. While that’s a distinct possibility, ABC seems too invested in Cristela to do something like that, not when Behind the Tank could be used to plug other holes on the schedule (e.g. Tuesdays at 8:00). With Shark Tank still around a 2.0 in the demo, Cristela is looking similar to The Neighbors in that it’s not performing that well but it’s not harming the night as a whole, so ABC could easily let it play out the string and see how it holds up come spring.

The McCarthys (CBS)
Premiered: Thursday, October 30th
Episodes Aired: 2
Production Studios: CBS Television Studios and Sony Pictures Television
Previous Time Slot Occupants: Two and a Half Men (fall), The Crazy Ones (winter/spring), Bad Teacher (spring)
Will It Get More Episodes?: No. The McCarthys came in as CBS’ lowest fall comedy premiere of all time and slipped in its second week, so it would have to greatly improve in the next couple of weeks in order to make it all season. And even then, CBS has projects to replace The McCarthys, which was picked up as a result of weak comedy development (a’la Partners from 2012), with, including Matthew Perry-starring The Odd Couple and the 22-episode fifth season of recently syndicated Mike & Molly. With Elementary at dangerously low levels, fellow comedy basement dweller The Millers owned by CBS, and Scorpion becoming the network’s biggest fall hit, thereby keeping the return of the Monday comedy bloc off the table for this season, there’s simply no room on the schedule for The McCarthys. At this point, if the show manages to air a double digit number of episodes, it would be a pretty tremendous victory.

Red Band Society (FOX)
Premiered: Wednesday, September 17th
Episodes Aired: 6
Production Studios: ABC Studios, Amblin Television, and Filmax International
Previous Time Slot Occupants: The X Factor (fall), American Idol (winter/spring)
Will It Get More Episodes?: Maybe. A Red Band Society extension depends on two things: 1) how much FOX values (and can monetize) DVR ratings and 2) what FOX wants to do with Fridays. Red Band Society has made itself competitive for a back order thanks to strong Live + 3 and Live + 7 numbers, which offset pretty dire Live + Same Day ratings, but where those numbers have been harder for the networks to monetize, they might not be enough for Red Band to see past its thirteenth episode. What could help the show’s case, though, is what FOX decides to do with Fridays; back order or no back order, Red Band Society will have to move from its Wednesday slot to accommodate American Idol, so its best hope for an extension is that FOX keeps it around to fill out Fridays this spring. If FOX believes in it enough, it might be able to shift to Tuesdays with female-friendly comedies New Girl and The Mindy Project, where the three would have to feed off of one another, but the most likely fate for Red Band, should it get a back order, is Fridays with the final season of Glee.

State of Affairs (NBC)
Premiered: Monday, November 17th
Episodes Aired: 0
Production Studio: NBCUniversal Television
Previous Time Slot Occupant: The Blacklist
Will It Get More Episodes?: Yes. It’s not as emphatic a yes as one would expect given the factors working for the show (Katherine Heigl’s return to television, a spot behind The Voice, Blacklist-y ad campaign), but that’s moreso due to the strange scheduling than anything about the show itself. NBC will be airing three episodes of State of Affairs behind a weakening The Voice before (presumably) bringing it back in January as a lead-out to Celebrity Apprentice; had State of Affairs started out behind The Voice, thereby getting that show’s highest ratings as a lead-in and airing in a similar pattern, it would’ve been a shoe-in for a back order. However, the on-off scheduling and the weaker lead-in will be a major test for State of Affairs, one that, if it can hang on to February/March and the return of The Voice, could lead to an extension that will take it through the remainder of the season and help it make it a decent push for season two.