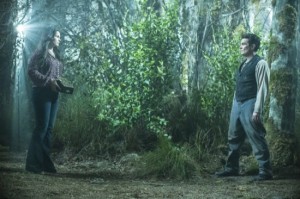 With the amount of information made available to television networks, it’s a wonder that renewal decisions take as long as they do sometimes. One would think that with an assortment of time-shifting data, demographic breakdowns, and intricate budget reports that renewals and cancellations, even for the most bubble-y of bubble series, would be decided by the end of a show’s season. However, renewals are often based on factors outside of numbers, with studio affiliation, scheduling room, development strength, and executive changes playing as big a role as Live + 7 numbers and audience skew. As such, weighing out every factor and trying to parse through the cases for and against a bubble show can often take time, much to the chagrin of dedicated fan bases.

But Lifetime supernatural drama Witches of East End seemed to have a stronger case going for it than against it, which makes its November 4th cancellation all the more perplexing and, frankly, frustrating. Though the show ended its second season without a renewal decision, it seemed like a foregone conclusion that it would return for a third season, given that fellow Lifetime veteran Devious Maids also suffered a sharp ratings drop in a move to another time of year. Granted, Maids was always the higher rated of the two, but the fact that it took several months for the Marc Cherry soap to get renewed seemed to point toward a similar fight (and similar result) for Witches. Yet Lifetime ended up cancelling Witches of East End after two seasons, something that could come back to bite them.

As evidenced by their recent series pickups, Lifetime is looking to expand the definition of what it means to be a scripted show on their network. Coming up in the near future are Un-Real, a behind the scenes look at a reality dating series that focuses on a staff member tasked with manipulating relationships; The Clan of the Cave Bear, which takes place 25,000 years ago; and Damien, a sequel series to iconic film series The Omen which would concentrate on an adult Damien Thorn. Though it might be understandable that the network wants to change its perception, Witches of East End walked the line between the two Lifetimes that have developed thanks to these series orders – it’s very much a genre show, so it doesn’t necessarily fall in line with the network’s history of soaps, but it’s a genre show that’s overwhelmingly female, a tweak on the old “Television for Women” adage that throws a group of strong women into an unusual situation. Keeping Witches around would not only keep the network from reinventing itself too quickly, thus risking alienating those who’ve remained loyal over the years, it would allow that network a piece of flexible genre entertainment that explores issues (femininity, female empowerment, female sexuality) that might not be addressed in their other projects. For as much as Lifetime needs to keep up with the Joneses and all these new networks throwing their hat into the scripted ring, they’re risking losing what makes them distinct by cancelling Witches of East End and thereby diluting their brand as a network built for stories about women embracing their power and making their way in a sometimes unkind world.

What’s most interesting about the Witches of East End cancellation was that it left Lifetime with a whopping one veteran series in 2015. Part of the reason that I was as assured as I was that Witches would be returning was that it seemed impossible that a network would order as many new shows as Lifetime did and then ask them all to self-start. Placing two new shows together on a schedule, even if you’re a cable network, is pretty suicidal, in that one almost always dies – it’s too much to ask a new show to launch something wholly on its back, while the lead-out never receives the same amount of sampling and is often at the mercy of its DVR performance. Even if Witches of East End was down over the course of its second season, having it around to help bolster the new shows and give Lifetime a steadier utility player (once it got its sea legs this summer, Witches ended up being pretty consistent) to fill out its schedule sounds better than asking the 2015 premieres to go it alone. Lifetime might be as confident as ever in Un-Real and Damien, but that doesn’t mean that they’re not going to need help or that confidence is going to translate into a strong launch. With Army Wives concluded, The Client List cancelled, and Drop Dead Diva dead for a second time, Lifetime lost several power players over the last couple of years; however, that doesn’t mean that wiping the slate clean is the answer, not when Witches of East End was still putting up renewable numbers in a worse situation than it had in season one. Renewing the show for a third season would’ve allowed it to act as a bridge between Lifetime identities, keeping the network’s female-focused feet in the past while being compatible enough with the new projects to act as a lead-in without feeling out of place.

Most pressingly, the cancellation of Witches of East End is a sign that shows about women are an endangered species. Lifetime is the latest network to back away from focusing on female audiences, as we TV dropped “Women’s Entertainment” from its name, Style was rebranded as male-focused Esquire, and The CW doing away with soaps in favor of comic-based and science-fiction programming. There are networks still invested in telling female stories, with Bravo and E! entering the scripted fold with Girlfriends’ Guide to Divorce and The Royals, respectively, but for the most part, female audiences are being ignored in favor of male audiences, the most elusive demographic in all of television. Not only is it harder to get men to watch live television, meaning that advertisers will pay more for those who do tune in, male-centric programming tends to generate more critical and social media buzz, which can often be as valuable as advertising dollars to a network looking to make a splash. In trying to broaden its demographic, Lifetime has put itself in the unenviable position of having to reverse a reputation built through years of catering to female audiences; it’s going to take quite a bit of groundwork for men to even find the network and if this latest wave of scripted series doesn’t pan out, there’s a distinct chance that their core audience might not be as quick to return as they might have thought. Lifetime might not be the scripted powerhouse that it seems to want to be, but there are worse positions to be in than having one hit show and one moderately-rated show with a vocal, passionate online presence.

Thus, the cancellation of Witches of East End was short-sighted: it’s too much change too quickly for Lifetime, something that could turn off a sizeable segment of its fan base; it leaves Devious Maids as the only returning show in 2015 and puts even more pressure on the new shows to perform, given that they don’t have a lead-in; and it inadvertently continued the marginalization of female-focused programming that Lifetime, formerly known as “Television for Women,” should be one of the leaders in fighting against.

You can purchase the first two seasons of Witches of East End on iTunes here and here. The first season is available on DVD here, with the second season only available through Amazon Instant Video. Additionally, a petition to bring the show back, which currently has 62,000 signatures, can be found here.