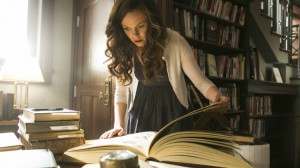 Ingrid was always the skeptic in the Beauchamp family, the one who made sure to be careful with each decision she made and who wanted to see empirical evidence before she believed anything too far-fetched. It’s an approach that might have worked for her in the past, giving her the type of security and comfort that she lacked, but once she found out about her power, she realized that she had been limiting herself by living this way. Ingrid couldn’t become the witch that she wanted to be if she kept being afraid or if she wasn’t willing to take a chance, but how will that desire for spontaneity come into play now that her grandfather has returned?

On the next episode of Witches of East End, Ingrid bonds with her grandfather while Joanna, Wendy, and Freya are away – perhaps too much, as she makes it known that she wants to accompany him back to Asgard. Part of that might be from her gratitude toward her grandfather for saving herself and Freya, but Ingrid of the past would have never suggested such a thing, not without consulting her mother and giving herself time to consider all options. But even with the possibility that her grandfather had an ulterior motive in saving herself and her sister lurking around, Ingrid opts for the more dangerous approach, something that could very well get her hurt if she’s not careful enough. As much as Ingrid might’ve come to resent being the Beauchamp “anchor,” she might need to tap into that cautiousness if she wants to ensure that her grandfather is only in this realm out of concern and need to heal old familial wounds.

Elsewhere on Witches of East End, Freya, Wendy, and Joanna explore one of their past lives while looking for something, while Dash learns the true identity of the woman he had a one night stand with.

Do you think that Ingrid will return to Asgard with her grandfather? What could Joanna be so concerned about that she had to go through the time door to retrieve? How will Dash handle the knowledge that the woman he had a fling with is investigating the recent string of murders in East End?