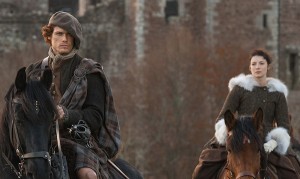 Starz has announced that the first season of Outlander will resume Saturday, April 4th, 2015 at 9:00, where it will likely air alongside the third season of Da Vinci’s Demons. The network ordered a super-sized 16 episode season of the literary adaptation and opted to air said episodes in two eight-episode chunks.

Based on the Diana Gabaldon-penned series of novels and adapted for television by Ronald D. Moore (Battlestar Galactica), Outlander tells the story of newlywed World War II nurse Claire Randall (Caitriona Balfe) as she finds herself transported back to 18th century Scotland. Once there, she aligns herself with handsome warrior Jamie Fraser (Sam Heughan) and soon enough, Claire begins developing feelings for him that go beyond the arrangement of convenience she thought she was getting herself into.

The midseason finale of Outlander is slated to premiere Saturday at 9:00 on Starz. You can check out a preview for the episode, as well as a sneak peek, below.

Will you be watching the Outlander midseason finale? Are you okay with the network’s decision to air the first season so far apart? What do you hope to see during episodes nine through sixteen of Outlander?