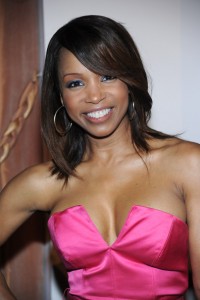 TV One has announced that original horror film The Fright Night Files is slated to premiere Saturday, October 18th at 8:00.

“Expanding our original movie slate with a trilogy of terror required a relatable entry point and what better than tales of fatal attraction, as many of us have experienced relationships that end up feeling more like nightmares,” said D’Angela Proctor, SVP Programming and Production, TV One. “The Fright Night Files delivers a perfect cinematic blend of romance, fear and excitement, just in time for Halloween.”

The Fright Night Files is a compilation of three short films bound together by the theme of deadly romance, with Lynn Whitfield’s (Eve’s Bayou) character, voodoo expert Madame Mabry, to guide viewers through each tale of romance gone wrong. The role will be similar to the role that the Crypt Keeper played throughout Tales from the Crypt.

The first film in The Fright Night Files is Pillow Talk Channel 187, which stars Elise Neal (The Hughleys) as a radio DJ who begins to receive calls from past lovers; the second film will be For the Love of Lockwood, where Marla Peters (Eva Marcille) is confronted with jealous feelings right as she’s about to walk down the aisle; and the third film is set as Mirror, Mirror, which follows a love triangle between Ronnie (Harry Lennix), Alexa (Victoria Rowell), and Jessica (Davetta Sherwood).

You can check out a trailer for The Fright Night Files below.