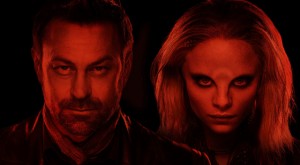 Syfy has opted to renew summer dramas Defiance and Dominion for their third and second seasons, respectively, the network announced on Thursday. The news comes about a month since the former signed off, while the latter has been off the air since August 7th.

From Vaun Wilmott (Sons of Anarchy), Dominion takes place in a world 25 years removed from a war between archangels Gabriel (Carl Beukes) and Michael (Tom Wisdom), with the latter having sided with the humans while the former leads a band of lower angels in the battle for supremacy. Resulting from the battle were fortified cities protecting the humans from the angels until the day the prophesied savior of mankind grows into his power. In addition to Beukes and Wisdom, Dominion stars Christopher Egan (Kings), Roxanne McKee (Game of Thrones), Luke Allen-Gale (The Borgias), Anthony Head (Buffy the Vampire Slayer), and Alan Dale (Lost).

Defiance and Dominion are a part of Syfy’s growing scripted slate that will be geared toward harder, more serious pieces of science fiction. The network currently has conspiracy drama The Expanse, alien terrorism drama Hunters, time travel drama 12 Monkeys, adventure drama Killjoys, and mythology drama Olympus all ordered to series and slated to premiere over the next couple of years.

Both Defiance and Dominion will return for their 13-episode new seasons sometime next summer on Syfy.

Will you be watching the next seasons of Defiance and Dominion? Would you like to see the two paired together again next summer? Are you liking this new creative direction that Syfy has been going over the past year or so?