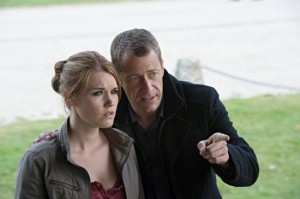 Syfy has officially unveiled its plans for fall, which include the return of a fan favorite drama, the premiere of a new unscripted series, and the tenth anniversary of a seminal series in their development.

Kicking things off will be the fifth season premiere of Haven Thursday, September 11th at 10:00. It’s a new night for the series, which has been renewed for a 26-episode fifth season, and one that finds Duke fighting to contain the Troubles within him and Nathan facing the possibility that Audrey is gone forever. Replacing Haven on Fridays this fall is zombie drama Z Nation, which showcases a world three years removed from the outbreak of the zombie virus. In the series, which stars the likes of DJ Qualls and Harold Perrineau, a team of unlikely heroes transports the first known case of someone surviving a zombie bite from New York to California, with hope that a cure is on the horizon.

The network will premiere new unscripted series Town of the Living Dead on Tuesday, October 7th at 10:00. The series follows the goings-on in Jasper, Alabama as a group of town residents are determined to complete the zombie movie they’ve been working on for the past six years. Also in the unscripted realm is the 10th season return of Ghost Hunters on Wednesday, October 8th; the team is set to travel to Brunswick, Georgia’s Old City Hall and Elizabeth V. Edwards Elementary School in Barnegat, New Jersey, as well as return to the Trans-Allegheny Lunatic Asylum in Weston, West Virginia, over the course of the season.

Highly anticipated miniseries Ascension will be the final fall premiere for Syfy, bowing Monday, November 24th at 9:00. The series tells the story of a space mission launched in the 1960’s that sent hundreds on a century-long voyage aboard the starship Ascension and how, halfway into the mission, a murder could change everything.

Finally, two Syfy movies will be premiering during October – Dark Haul, about a team of guardians tasked with transporting a deadly creature and its human half-sister to a secure location; and Finders Keepers, which stars Jaime Pressly and focuses on a child who becomes obsessed with an evil doll left by the previous occupants of her home.