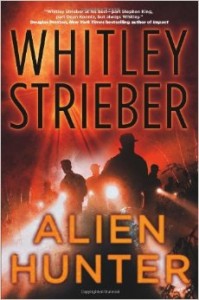 Syfy has announced that alien terrorism drama Hunters has been ordered straight to series and given a 13-episode first season.

“We were so impressed by the pilot script from this outstanding and accomplished creative team led by Gale Anne Hurd and Natalie Chaidez that we bypassed the traditional process and greenlit Hunters directly to series,” said Syfy president Dave Howe. This fast-paced and innovative program takes viewers inside a chilling yet all too familiar world.”

Based on Whitley Strieber’s novel Alien Hunter and adapted for television by Gale Anne Hurd (The Walking Dead) and Natalie Chaidez (12 Monkeys), Hunters follows a Philadelphia cop as he searches for his missing wife. Along the way, though, he discovers a terrorist cell featuring those who may not be from this world. No casting has been revealed as of yet, though word of who’ll be starring in the project should leak in the coming months.

Hunters is slated to premiere on Syfy in 2016.

Will you be watching Hunters? Do you think the show will fit in with the rest of Syfy’s scripted programs? Are you a fan of the network’s attempted rebrand?