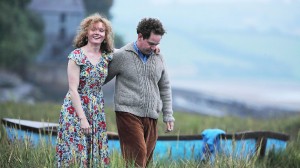 BBC America will be airing film A Poet in New York on Wednesday, October 29th at 8:00.

Starring Tom Hollander (Rev), A Poet in New York follows the last days in the life of renowned poet Dylan Thomas, whose death in 1953 was ruled a result of pneumonia. Though Thomas was in New York to fulfill a commitment to the Manhattan Poetry Centre, the trip was merely was a way to fund his ultimate goal of going to Hollywood and writing an opera with Igor Stravinsky. It should have been the zenith of his career, a time when he could reflect on the progress he made while looking forward to a promising future, but his hard-partying lifestyle caused his life to spin out of control and ended up being one of the primary cause of his death. A Poet in New York will explore how his experiences made his life untenable and how his self-destructive personality played a part in ending a career that looked to only be beginning.

Will you be watching A Poet in New York? Would you like to see BBC America do more television films on figures like Dylan Thomas? What other figures in British history do you think would make interesting subjects for a film like this?