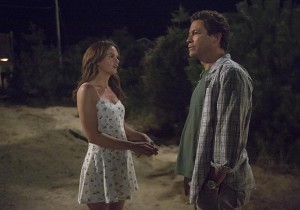 Showtime has made the first episode of infidelity drama The Affair available through Youtube one week before the show’s television premiere.

Executive produced by Jeffrey Reiner (Friday Night Lights) and Eric Overmeyer (Treme), The Affair follows history teacher Noah (Dominic West) as he brings his family to Montauk for a summer of sun, sand, and relaxation. After a tough school year pounding the pavement in Brooklyn, he wants to spend time with his kids, get in a little writing on his second novel, and find a way to slow down for once in his life, but all that gets thrown for a look when he meets Alison (Ruth Wilson). Still grieving a loss in her life, Alison meets Noah at a quiet diner one morning and the two feel an instant attraction to each other, though since both of them are married, neither of them decide to pursue whatever it was that they felt between them.

Until, that is, they run into one another later that night. Still curious about their connection and the possibility that the other possesses something that their respective spouse doesn’t, Noah and Alison let things go further than they had intended, something that could threaten their marriages and the lives they had worked so hard to build.

In addition to West and Wilson, The Affair stars Joshua Jackson (Dawson’s Creek) as Alison’s husband Cole and Maura Tierney (Rescue Me) as Noah’s wife Helen.

The series premiere of The Affair airs Sunday, October 12th at 10:00 on Showtime. You can check out the opening credits for the show here, as well as sneak peeks from the first episode here and a behind the scenes look at the series here.

Will you be watching The Affair? How far do you think things will go between Noah and Alison before their respective spouses find out about their connection? Are Noah and Alison going to regret taking their relationship as far as it goes?