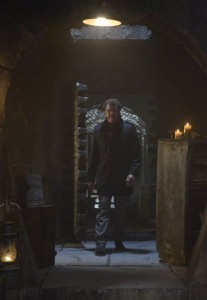 Ever since Ichabod and Abbie began working together, they’ve made quite the progress toward understanding their true mission, finding the type of common ground necessary to help their working relationship, and saving the world from the threats that seek to destroy it. However, as quickly as they were learning about what was expected of them as guardians, neither of them were able to pick up on the fact that the Sin Eater was Ichabod’s son Jeremy – the Second of the Four Horsemen of the Apocalypse. That lack of awareness threatens to undo all of the good that Ichabod and Abbie have done since they first teamed up, but will either Ichabod or Abbie escape their precarious positions in order to stop War from enveloping Sleepy Hollow?

On the season premiere of Sleepy Hollow, the town edges toward destruction now that Jeremy has free reign. While Ichabod is trapped in a coffin similar to the one that his son was for two centuries, he’s unable to help Abbie escape purgatory, free Katrina from the grasp of the Horseman, or pull Jenny from the car crash that she was involved in. If Ichabod doesn’t find a way to escape the coffin, his resurrection will have been for naught, as there would be no one standing between the Horsemen and the beginning of the apocalypse; whether he likes it or not, Ichabod will be one of the defenders of the world for the next several years, giving him a sense of purpose that outweighs how lost he feels in this new world that he’s been brought up in. In order to continue living in, exploring, and protecting this world, he’s got to free himself and find ways to rescue those he loves the most from the fates that his son played a part in facilitating.

The second season of Sleepy Hollow premieres Monday, September 22nd at 9:00 on FOX.

Will you be watching this season of Sleepy Hollow? How do you think Ichabod will be able to escape the coffin he was trapped in? Is Abby’s escape from purgatory predicated on Ichabod freeing himself and rescuing Jenny?