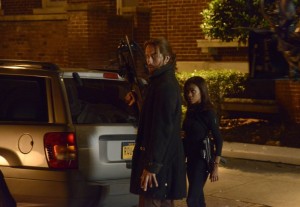 Rather than force Katrina to go back into the hellish purgatory that she just escaped, Abbie opted to go in her place, both as a gesture to her friendship with Ichabod and a realization that Katrina’s magic would be better used out in the open. However, Abbie now has to find her way out of purgatory without falling victim to the demon that first visited her as a child and she unknowingly has to do this without the aide of Crane. But could someone Abbie runs into while trying to get her wits about her provide the key to getting her out of the prison she willingly locked herself in?

On tonight’s season premiere of Sleepy Hollow, Abbie runs into Brooks while in purgatory and though she’s initially hesitant to trust him, given everything he’s done since aligning with Moloch, she knows that there’s not much in the way of options where she is. Andy was once a friend and he gives her enough information (this time about Moloch’s planned demon army invading Sleepy Hollow) that she can’t afford to take for granted. While a quick escape for Abbie might not be in the cards right now, considering Moloch’s increasing strength and the amount of time it takes to free someone from purgatory, Brooks can get messages to the outside world and round up the troops to retrieve his former friend from her terrifying tomb. But after Abbie gets out of purgatory, will she trust Andy, assuming he helps her return to the outside world? Or has he done too much for her to be able to put her faith in?

Elsewhere on Sleepy Hollow, Katrina tries to trick the Horseman in order to free herself, while Crane remains trapped in Jeremy’s coffin and Irving looks for ways to get himself out of jail for a crime he didn’t commit.

The second season of Sleepy Hollow premieres tonight at 9:00 on FOX. You can check out photos from the premiere here.

Will you be watching the second season of Sleepy Hollow? Do you think Brooks will be an asset to Abbie or will he ultimately turn against her and Crane? How will Ichabod get out of the coffin that Jeremy locked him in at the end of season one? 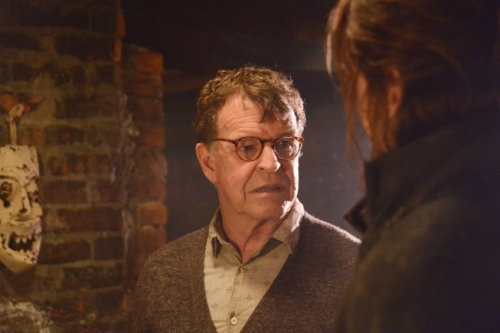