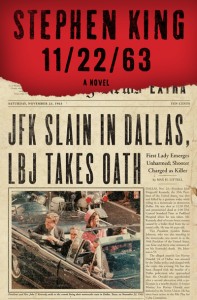 Hulu has announced that 11/22/63, an adaptation of Stephen King’s best-selling 2011 novel of the same name, has been ordered to series.

Hulu Senior Vice President and Head of Content Craig Erwich said: “J.J. Abrams and Stephen King are two of the most celebrated storytellers of our time, and we are excited to be working with them and Warner Bros. Television to bring this unique take on one of the most seminal historic events of the twentieth century to Hulu. 11/22/63 already resonated with audiences as a best-selling novel, and we are looking forward to bringing the riveting story to the screen.”

Set to be a nine-hour event series, 11/22/63 follows high school English teacher Jake Epping as he travels back in time to prevent the assassination of President John F. Kennedy. Once he makes it back there, though, his plans to alter history run into a series of obstacles that threaten to negate the reason for the journey in the first place. The series will be executive produced by King, J.J. Abrams (Alias), Bryan Burk (Lost), and Bridget Carpenter (Friday Night Lights), with Carpenter slated to write the first episode’s teleplay.

Though Hulu has had some high-profile acquisitions (Misfits) and well-received original content (Battleground), 11/22/63 is a move that could bring more buzz to their scripted slate and help the streaming service make up ground on Netflix. There’s no word about when to expect 11/22/63 to premiere, nor has any casting news been announced as of yet.

Would you watch an adaptation of 11/22/63? How do you think this will stack up against other King adaptations, both from the film world as well as the television world? Who could you see playing Jake?