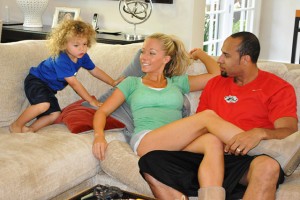 WE tv has announced that the third season of Kendra on Top will premiere Friday, October 3rd at 10:00, with the show moving to its 9:00 time slot the following week. Whereas the first two seasons of the show focused on happier times, from Kendra Wilkinson’s business dealings to her continued embrace of motherhood, season three of Kendra on Top finds the former Playmate dealing with the shocking claim that her husband Hank Baskett had an affair with a transsexual model.

Just five weeks after giving birth to her second child, Kendra is forced to confront the deception within her marriage and the potential downfall of a relationship that she thought would last forever. Luckily, best friend Jessica Hall rushes to her side and gives her the type of support that she needs in such an emotionally trying time. While Hank leaves the home with Hank IV in order to spare the young boy the glare of paparazzi flashes, Kendra and Jessica analyze where everything went wrong in the former’s marriage, with Kendra also turning to her estranged mother in this time of personal crisis.

You can check out a sneak peek at the third season of Kendra on Top here.

Will you be watching the third season of Kendra on Top? Do you think that Kendra and Hank will get a divorce over the infidelity allegations? Would you leave your significant other if they were accused of cheating on you?