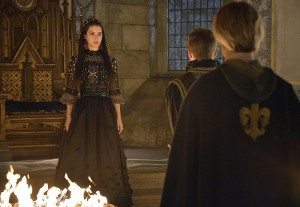 Mary has never really had a chance to rule by herself. Her position in Scotland was nothing more than a figurehead and she’s always had Catherine lurking around the castle, clinging to the last of her power as Henry continued to spiral. Now that Henry is gone, Mary is allowed to feel the full force of her power, to assume the positions that she has been groomed for since before she was born. All the pain, all the strife, all the pressure that she’s had to deal with in France – it will all be worth it once she assumes the throne and gets the opportunity to help her country. But will Mary be able to handle herself now that she’s been separated from Francis?

On the season premiere of Reign, Mary is the sole leader in the castle now that Francis has ridden out to be with Lola. Not only do the two have the physical distance between them, which seems all the more vast due to the spreading plague, their emotional distance will only increase when he makes it back to the castle with Lola and his new son – the one thing that Mary hasn’t been able to give him. However, this chance might be the best thing that happened to Mary, as she has the opportunity to get in touch with her power and learn the true value of personal independence. Mary has never been able to live for herself or with the type of agency that she has now, not when her future was earmarked at an early age, and as long as Francis is away, she can grow strong as Queen of France and show herself that she can find fulfillment and success without being tied to another person.

Elsewhere on Reign, Kenna and Bash find themselves separated during the chaotic days of the plague, while Greer is forced to watch as Leith moves on with a new love and figures in the castle attempt to take advantage of Mary’s separation from Francis and seize the power that they deem theirs.

The second season of Reign premieres Thursday, October 2nd at 9:00 on The CW.

How long will it be before Mary and Francis are reunited? Will Greer ever be able to get over Leith, especially now that he’s seeing Lord Castleroy’s daughter? Is the castle going to be able to get a handle on the plague before it gets too much to deal with?