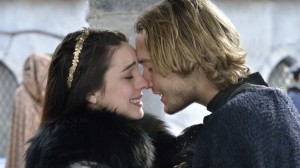 The CW has released the first trailer for the second season of Reign, which centers on the Black Plague that befell France at the end of season one. The final images of the season, with Mary shutting the gate on Francis and forcing him to stay out in the country while the plague rages on, will play a key role in the season, as Mary and Francis are separated by more than just distance and a wooden gate.

There’s the whole matter of the French king and queen having different countries to serve and different political interests weighing on them. While Francis will have to worry about preserving his father’s legacy and doing right by both Lola and the child they conceived, Mary is allowing the words of her uncle, those pertaining to her taking France herself and becoming more powerful than Francis, to roam free in her mind. It’s understandable, considering that Mary has very rarely, if ever, felt secure while in French court, as she knows that France doesn’t exactly hold the alliance with Scotland in high regard; however, it’s something that could destroy the foundation of her marriage, especially if she allows it to join forces with her jealousy over Lola’s pregnancy and manifest as hostility and anger toward Francis.

Mary cannot hold on to the negative thoughts she has about her position at court, the security of her marriage, and the baby that Francis conceived with another woman and hope to have a happy relationship. Though she might be right regarding how poorly France has treated her and how she and Francis are on two separate pages, she doesn’t have the option of leaving. If she does, her entire country would be weaker for it, so she has to find a way to make things work with her husband and if that means swallowing her pride, then so be it.

The second season of Reign is set to premiere Thursday, October 2nd at 9:00 on The CW.

Will you be watching the second season of Reign? Do you think Francis and Mary’s marriage will be able to survive the Black Plague? Which aspect of season two are you most looking forward to?