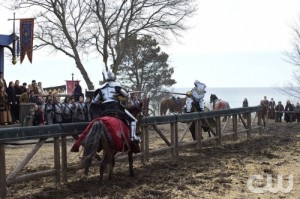 Francis has stuck by Henry through his madness, claiming that his father is still his father and that there’s a man under the madness that’s been festering as of late. While that might be admirable on a level, a son not allowing extenuating circumstances to extinguish the love he has for his father, it’s also quite dangerous, as an unstable Henry makes for an unstable France. Also unbeknownst to Francis is the fact that Henry is plotting to take his son out and wed Mary to gain control of England and, by extension, half of Europe. As much as Francis might love his father, it’s time for him to be neutralized before anyone else gets hurt as a result of his declining mental state.

On the season finale of Reign, the royals, including Francis, make the tenuous decision to stage a coup and enlist the military in removing Henry from the throne. However, the problem there is two-fold – if it doesn’t work, they’re at the mercy of a benevolent ruler with a mental illness, a strong sense of paranoia, and a violent streak a mile way. If it does work, they’re possibly letting the military in too much and promoting the instability they’ve been so keen on masking. However, they can’t keep living under Henry’s rule, not when he’s not showing any signs of getting better, so the trio must band together and neutralize the One Great Threat to France, father or not. Husband or not. Ruler or not.

Elsewhere on Reign, Mary learns that Lola is going through a life-threatening birth outside the castle walls, while terror in the woods could unseat the royal coup plans and threaten the lives of all involved.

The season finale of Reign airs Thursday at 9:00 on The CW.

Will the coup against Henry succeed? What will happen if the coup fails and Henry remains both mad and unhospitalized? Do you think that Lola will survive giving birth and if so, is her baby going to end up in royal possession?