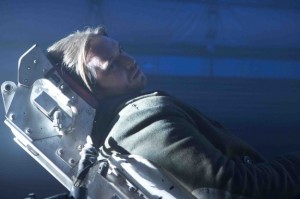 Syfy has released the first extended trailer for its upcoming adaptation of 12 Monkeys.

Based on the 1995 Terry Gilliam feature film and adapted for television by Terry Matalas and Travis Fickett (Nikita), 12 Monkeys tells the story of a time traveler (Aaron Stanford) from the post-apocalyptic future who travels back to present day to locate and destroy the source of a devastating plague. Once he arrives, though, he learns that his mission will be more difficult than he anticipated and could possibly cost numerous innocent lives in order to be completed.

In addition to Stanford, 12 Monkeys stars Amanda Schull (Suits), Kirk Acevedo (Oz), and Noah Bean (Damages). The series is the latest piece in Syfy’s plan to re-embrace harder science fiction, an agenda that began this year with the premieres of Helix and Dominion. Once home to lighter fare like Eureka and Warehouse 13, the network has a six-episode miniseries set aboard a space craft coming this November, with adaptations of The Expanse and The Magicians already in the works.

12 Monkeys is set to premiere January 2015 on Syfy. A concrete premiere date should be released later this year.

Will you be watching 12 Monkeys? Do you think the show will be able to find an audience on Syfy? Are you looking forward to Syfy continuing to re-embrace darker, harder science fiction?