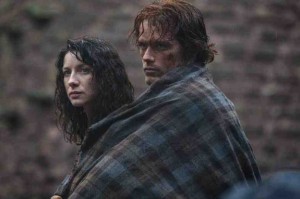 Outlander tells the story of recently married World War II nurse Claire Randall (Balfe), who finds herself transported to 18th century Scotland with no foreseeable way of returning home. In order to protect herself, she aligns herself with handsome warrior Jamie Fraser (Heughan), only to fall for him while in the midst of their arrangement. Though Claire initially holds onto hope that somehow, some way she can return to the life she once lived, she grows conflicted about her true desires and becomes caught between two men, two worlds, and two lives.

The series premiere of Outlander airs Saturday, August 9th at 9:00 on Starz. The episode will be made available through Youtube, the official Outlander website, the Outlander Twitter, the Outlander Facebook, the Starz Play app, and various on demand services a week before the scheduled television premiere. Starz will also air the series premiere on television Saturday, August 2nd at 9:00 in order to increase sampling on the series that could prove to be its next breakout.

Will you be watching Outlander? Did the panel make you more excited for the series to premiere next month? Are the opening credits in line with your expectations for the show itself as far as tone?