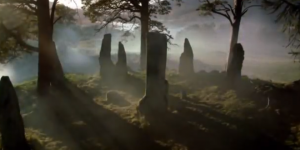 Starz has made the first episode of upcoming period drama Outlander available through its Youtube channel one week before the official television premiere. The series premiere will be airing on Starz Saturday, August 2nd at 9:00, with the episode also released through the official Outlander website, the Outlander Twitter, the Outlander Facebook, the Starz Play app, and various cable, satellite, and Telco affiliates.

Based on the best-selling novel series by Diana Gabaldon and developed for television by Ronald Moore (Battlestar Galactica, Helix), Outlander follows World War II nurse Claire Randall (Caitriona Balfe) as she finds herself mysteriously transported to 18th century Scotland. Once there, she is forced to align herself with handsome warrior Jamie Fraser (Sam Heughan) in order to protect herself; however, through the time she spends with him, Claire develops feelings for Jamie, something that complicates her desire to head home and return to the life she once led.

The series premiere of Outlander is set to air Saturday, August 9th at 9:00 on Starz. The 16-episode first season will be divided into two chunks of eight, with episodes nine through 16 to premiere in 2015.

Will you be watching the first season of Outlander? If you’ve read the Outlander novels, how do you think the first episode compares to the world Gabaldon’s built? Is this an ideal show for the split season treatment?