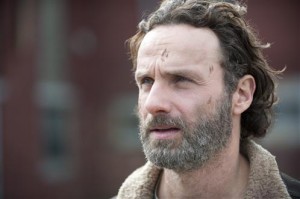 “From the opening tease in the premiere onward, season 5 is without question the most ambitious and satisfying season this amazing team has ever crafted,” said Charlie Collier, AMC president. “In the zombie apocalypse, event television is alive and well, and I am proud to acknowledge that this uniquely talented writing staff, production team and cast have once again raised the bar (and the crossbow).”

In addition to releasing the extended trailer for the fifth season of The Walking Dead, a season that finds Rick reunited with most of his group and looking to take over Terminus, AMC announced that Seth Gilliam (Teen Wolf) would be joining the cast of the zombie drama in an as-yet-unspecified role. Meanwhile, recurring players Andrew J. West (mysterious Terminus leader Gareth), Alanna Masterson (Lily’s sister Tara), and Christian Serratos (Rosita, a member of Abraham’s group) have all been promoted to series regulars beginning with the fifth season premiere.

Will you be watching the fifth season of The Walking Dead? How much would you like The Walking Dead to deviate from the source material this season? Which of the promoted characters are you most excited to have around?