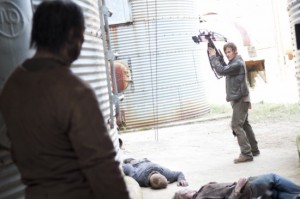 The fourth season of AMC’s The Walking Dead is set to premiere Sunday, October 13th, as announced during the show’s 2013 San Diego Comic-Con panel. Season four will have the same structure as season three, with eight episodes airing in the fall and another eight premiering in February. While season two utilized a split-schedule, it only had 13 to distribute; season one was only six episodes in length.

The show will once again premiere during AMCFearfest, which consists of 19 consecutive days of themed programming and runs through October 31st, while the network will run a week-long marathon from October 7th through October 13th. The season premiere will be complemented by material on amctv.com, including The Walking Dead Story Sync, bonus scenes, production diaries/photo galleries, and trivia games.

Season four of The Walking Dead finds Rick and the remaining survivors fostering what has turned into a thriving community within the walls of the prison. However, the true threat turns out to be not the walkers, starvation, or passers-by, but themselves, as life quickly turns from livable and something approaching content to the hellish cycle of despair and paranoia that has dominated the time post-outbreak. The first trailer for the fourth season was released in conjuncture with the premiere date announcement and in it, we see botched raids, hoards of walkers gathering by the fences rather than spreading, and an attack on the cell block that could lead to all the progress the community made being undone.

Will you be watching The Walking Dead this season? What do you think about the trailer for season four? How much of the comic material would you like to see over the next 16 episodes?