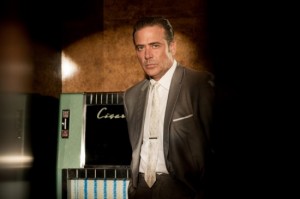 Ben has an alive (but bloodied) Theresa in his office – Bel’s punch at the end of last week’s episode only stunned the elevator operator rather than killing her. He asks her if anyone put her up to spying on the senator, only to remind her that his question was rhetorical and that he knows the answer before shooting her in front of a stunned Bel.

Ike and Sid sit outside one of Miami’s biggest bolita houses and discuss the plan to fix the Cuban national lottery, which Ike thinks will allow Castro to hit the mob hard and give him both the good faith money he needs and the Cuban casinos he desires. Meanwhile, Danny is at Klein’s office being yelled at for interfering in the raid that killed Alberto Lazaro, a guy who worked in the kitchen at the Miramar and was one of Vic’s cousins. Klein threatens the intern with obstruction of justice charges and Doug (the guy Danny hit and who shot Alberto) simply threatens him, even with Danny claiming that the reason he did what he did was the acquire information from Alberto about why he was there in the first place. Klein then tells him he’s not to come back into the officers until he’s told and that he’s forbidden from talking about the ongoing investigation.

However, as Danny’s leaving, Klein catches up with him and tells him that not only will he see Alberto’s face after watching the man be shot to death, he should make it about something. Use what he saw to further where he’s at, but Danny seems apprehensive about becoming that devoted to the law. Regardless, Klein tells him to be at the office first thing tomorrow morning, as they’ll continue working on the case.

At the Miramar, Vic is talking to the staff about what happened to Alberto and how they should get their grieving out of the way now before focusing on why he died and, more importantly, what he died for. He’s also more than a little perturbed at Ike, thinking that his boss only considered Alberto’s loss to be another hire he has to make, while Ike goes and breaks up Ben’s poker game due to the other bartender not being able to make it in. Stevie reluctantly complies and Ben informs Ike that he’s become very tiresome lately and that he knows about the Castro casino deal. He then offers to install Eddie in Havana to run the casinos while giving Ike his hotel back for 40% gross management costs. Ike’s response? Telling Ben to stay away from his son.

Danny makes it to Alberto’s funeral where he’s introduced to Antonio and quietly takes Mercy aside to tell her that he was there when Alberto died and where Alberto was when he was gunned down. Mercy gets quite upset at the revelation and throws him out of the funeral, just before Antonio comforts her at the casket. Meanwhile, Vera is having to see a doctor due to fluid buildup in her knee, which is only removable through a temporary, rather painful draining. She urges him to go ahead and do it because she has a show tonight and he reminds her that she’s putting her body through too much and that it’s tearing itself apart, causing her to cry on the table she was laying on.

Ben brings Madame Renee (and Brigitte, a Swedish prostitute with a fetish for being on a leash) out to the construction site for her new brothel, set to be strictly for worldly elites and men with deep bank accounts and deeper pockets. Her partner in this new business venture? Stevie, as Ben has named him co-manager of the as-yet-unbuilt building. Renee is upset at the blindside, considering that her goal is to clear (at minimum) $10 million a year, while Stevie doesn’t think he’s got enough experience to take on something like this, regardless of his experience at Madame Renee’s establishments. Ben tells him that management is in his blood and uses his recent stumbles with Ike as leverage, warning him that if he doesn’t walk through the open door in front of him, he would be doomed to a safe, comfortable life full of tourists, the same women, and not much excitement.

While Ike sees Vera on the balcony that night and comforts her over the loss of her dance career, Ben watches Lily masturbate in her bed and gets irritated that she’s not with Stevie. The only thing that’s keeping her alive anymore is the sexual satisfaction her affair with the bartender brings him and he gruffly informs her that long ago are the days of watching her pleasuring herself being enough; he can’t get it up without watching her with another man and if she’s going to survive long enough to use the money she’s been building up, she’s got to find a way to make Stevie come back to her. Ben then lays in bed with Lily, who goes to the Miramar later that night to try and convince Stevie to continue their time together. He, however, doesn’t want anything to do with her and questions why she chose him in the first place, considering her history. She mentions that the first time she saw his face, all she wanted to do was touch it and that she loves him and would have died for him. She still might, she adds, before leaving.

Ben goes with Antonio and several other of the Cubans to test the machine guns and mortars they acquired. He assures them that he’s an ally to be trusted and later deals with a frustrated Nicky, who lost four guys and $50 thousand in the raid; Ben wishes him a safe trip back to Tampa, thinking that he finally got rid of who could have been one of his greatest threats. While Ike finds out that Theresa has been killed, Eddie attempts to win Vera over with compliments and promises of her own room at Ike’s new casino. However, she had no idea about the casino’s existence and doesn’t wish to be called “Vera Cruz” anymore, nor can she entertain the thought of opening an entire room on her own, given her just-finished dance career.

She leaves and confronts Ike about the casino, which he claims is none of her business due to how he provides for her and protects her. Vera responds that she’s more than the face or the body that he fell in love with; she’s a complete person/wife/partner who went through a lot when she came to the United States at 14, someone who grew up in a society that didn’t place a high priority on secrets. He comes clean on the face that Ben is the minority partner at the Miramar, but he promises to fix the situation and get The Butcher out of their lives for good.

Ike goes to the bar where Stevie is and apologizes for acting as if he was a partner or employee rather than his son. Stevie presses him on the plan for him, that he’s ready to make big moves now vs. having to wait for Ike’s signal, and Ike mentions that the DJ convention is his – Bernie at the Americana was upset at having it stolen and now Stevie will be working under Victor and Vince to see it through. It’s a major vote of confidence, trusting Stevie with the Miramar, but there’s one caveat: no more Ben. And that’s not a choice.

The hotelier then meets with the new Secret Six and with Meg’s help, tries to convince them the value of using their resources to crush the mobsters that have infiltrated Miami. Printing Ben Diamond’s picture in the paper, for example, would cause the politicians and hit men that he’s in cahoots with to go running, leaving him isolated, exposed, and vulnerable. The meeting seems to go well and Ike celebrates with Meg over a drink, where she mentions her trip to Marakesh and the fact that you always seem to end up back where you started. Meanwhile, Danny is brought along on another raid, this time by Doug. The target? A camera club holed up in the Miramar, who are shooting fetish shots that star Judi Silver. After threatening her, Doug leaves the prostitute tied up and forbids Danny from offering her a helping hand.

Also at the Miramar, Ben threatens Lily over Stevie during a massage and that night, he sees her having sex with a lean 20-something with dark hair. However, it’s not Stevie; Lily got someone who looks exactly like Stevie to have sex with her and has to make sure he doesn’t show his face, as she knows that Ben is watching. The episode closes with Ike receiving the lottery numbers from Minister Nunez and Bel encasing Theresa’s body in the cement that will hold up Madame Renee’s latest establishment.

Additional thoughts and observations:
-So, Theresa was alive, everybody. Hmm. The way the last episode looked, she was dead, but the way they actually killed her off (and buried her) was more effective, so I’m okay with the ambiguity.
-What do you think Klein’s plans for Danny are? I know one of the main reasons he even got the position was his connection to Ike and the idea that Klein could turn him against his father; it just feels like there’s something more there, that Klein is waiting to spring something once he knows he has Danny’s trust.
-The show has done quite well by Vera this season. I like everything about her dancing career and coming to terms with being The Wife quite a bit, as well as Olga Kurylenko’s delivery of/backbone during “Then get a new wife.”, which was thrilling to see.
-Madame Renee’s “would you like to walk her?” and line about Stevie’s virginity story “warming what’s left of my heart” were close runner-ups for my favorite line of the episode. Also, what do you think the casting call for Brigitte looked like?
-I kind of thought that Ike seeing Vera again on the balcony would be another dream and that they would gradually reveal something about his wife to his subconscious that he didn’t know/wasn’t aware of.
-Clarity on Ben’s sexual appetite – awesome. He doesn’t just get a thrill out of being cuckholded; he has to see Lily with another man in order to get it up. Is his whole persona a way to make up for those feelings of inadequacy?
-The shots of Ben in the pool talking to Nicky were gorgeous. If you can say nothing else about this show, it’s one of the best shot on television and was absolutely robbed of technical Emmy nominations.
-Vera’s mention of “doing things” to survive when she first landed in America – do you think she was a prostitute?
-Next week on Magic City: Stevie’s DJ convention invades the Miramar, while Mercedes reveals news to Vera and Ike continues his scheme to fix the Cuban lottery.