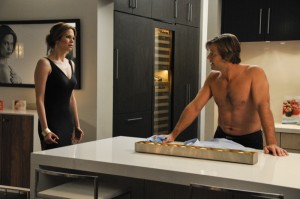 Once Spence overheard Peri telling Lois that she doesn’t respect him due to his poor acting ability, he seemed to let go of the idea that he had to stay with her for their child. While there’s no indication that he’ll be packing up and leaving, a weight was lifted from the soap star’s chest and for the first time since things had gotten bad with his wife, he was able to breathe. He didn’t have to worry about the state of their relationship because to her, there was no relationship and he doesn’t want to extend himself for someone who thinks that little of him, anyway. The revelation also allowed him to give himself permission, so to speak, to pursue his attraction to Rosie, but coming up on Devious Maids, his change in demeanor hasn’t gone unnoticed by Peri. Has he let the excitement of the kiss from Rosie and the freedom that he now enjoys become too evident in the way he interacts with his wife? Is there a chance she could find out what’s going on?

Listed below are the dates, titles, and description of the next two episodes of Devious Maids.

Sunday, July 21st – “Taking Out the Trash”
A visitor from Carmen’s past shows up at Alejandro’s house; Valentina meets Remi’s new friend; Peri becomes convinced that Spence is having an affair and tries to bribe Rosie into giving her the woman’s name; Evelyn and Adrian celebrate an important birthday.

What did you think of Spence kissing Rosie last week? Who do you expect to see from Carmen’s past? Now that Marisol has the correct autopsy in the hands of her lawyer, will building her case go smoothly from here on out?