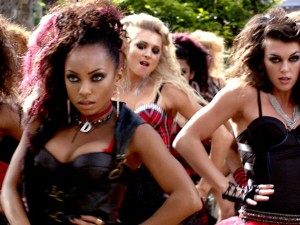 Already dealing with problems in her personal life, Ahsha stood up to Jelena once again last week on Hit the Floor, as she decided to put her name in for consideration at the All-Star game. After getting the chance to shine thanks to Olivia removing Jelena from choreography, Ahsha might actually have a chance at unseating the Devil fan favorite and earning herself a spot on the prestigious squad of the league’s best dancers; we’ve already seen that she caused quite a commotion at the charity event on the pier and the increase in calendar sales might fall squarely on her shoulders, so there’s demand for Ahsha Hayes out there. But just how hard will she have to fight to fulfill it while Jelena’s still around?

On the next episode of Hit the Floor, Ahsha will have to deal with Jelena putting herself up for All-Star consideration and the national vote that will decide the victor, who gets to dance in the All-Star game. While Ahsha may have the talent to go toe-to-toe with Jelena, in addition to the support from those who matter in Olivia and Pete, she’s not exactly the greatest in non-dance pressure situations and her green-ness in on-camera settings might end up costing her the chance to have a major professional victory. Jelena’s done things like the Extra interview hundreds of times and could charm the skin off a snake, so if Ahsha plans on getting what could turn into her big break, she needs to pull it together and push the nerves down as far as she can.

Elsewhere on Hit the Floor, Kyle socializes with a fan who might have ulterior motives in interacting with her, while Sloane gets caught in an awkward position and Terence plans a surprise for Jelena.

Hit the Floor airs Mondays at 9:00 on VH1. The show has already been renewed for a second season.

Who do you think will win the spot on the All-Star squad? What type of motives would the fan Kyle’s socializing with have? Do you expect Olivia to step up her interference in the Ahsha/Jelena rivalry to ensure that the right woman wins?