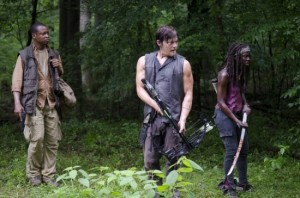 AMC has announced that The Walking Dead will be returning for a fifth season and that current showrunner Scott Gimple, who took over after Glen Mazzara exited following season three, will stay on. The fourth season premiere set a new record for the series, delivering 20.2 million viewers, live+3, and 13.2 million adults 18-49.

“We are very happy to make what has to be one of the most anti-climactic renewal announcements ever:  The Walking Dead is renewed for a fifth season,” said Charlie Collier, AMC president. “This is a show that has erased traditional distinctions between cable and broadcast. Its expanding base of passionate fans has grown every season, most recently – and most notably – with the season four premiere earlier this month, which broke viewership records for the series and became the biggest non-sports telecast in cable history. On behalf of the incredible team on both sides of the camera, thank you to the fans and here’s to more Dead.”

In addition to its status as the most watched scripted series on television, The Walking Dead has spawned a companion series, as AMC will base the show, which is currently in development, on a new story and new characters from Dead executive producer Robert Kirkman. There’s been no word as to how the companion/spinoff will incorporate into the world of the Dead or which, if any, Dead characters will be shifted from one series to the other.

The Walking Dead airs Sundays at 9:00 on AMC. You can check out a promo for the next episode of the show below.

What have you thought about the fourth season of The Walking Dead thus far? Are you glad that the current showrunner will be returning next season? How would you connect the show with the companion series that is being developed by AMC?