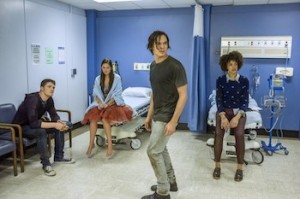 I. Marlene King was right. I was definitely not prepared for the second episode of Ravenswood. Tuesday night’s episode, “Death and the Maiden” confused me, scared me, and you know what? I totally loved it.

It’s going to take me a while to comprehend what I just watched, but all I know is that this show is not playing around. I can’t get over the fact that Miranda is dead! Some weird Final Destination stuff is definitely going on and why is it always 5? So many questions.

How creepy is Miranda’s uncle Raymond? He could just be standing there and I get the chills. It was really nice of Raymond though to invite Caleb back to the house since Caleb didn’t have anywhere else to go. I think Raymond inviting him to stay had ulterior motives, but it was nice none the less. Raymond creeps me out, but Mrs. Grunwald creeps me out even more. Why did Mrs. Grunwald ask Caleb if he called Hanna? Why would she care? There has to be something going on there and why did Mrs. Grunwald ask Raymond, “When you went to the hospital, how many bodies did you expect to find?” Raymond and Mrs. Grunwald are so shady. I think they know something about the curse. They have to, right?

I don’t know what’s going on, but I do know that something is going after the rest of the group and will not stop at nothing until they are all dead. If the curse was supposed to get all 5, why did it just get Miranda? All I know is that the curse must be stopped. But how? Luke was almost choked to death while lifting weights and the dog at the junk yard almost attacked Remy after being mysteriously let out of the van. Which by the way, Caleb, that was very cruel to lock a dog in a car. I know, I know, it was trying to attack you. You’re forgiven this time. The curse was going after them, one by one. Who will be next?

Just like their kids, the parents were having their own problems. Remy’s father was incredibly determined to keep Remy away from Luke and Luke’s mother felt the exact same way. I’m going to need some answers there, because it seems like there’s something else going on there. Mrs. Matheson was having her own issues. Luke found out that his parents were having marital problems before his death and his mother might have been having an affair. Oh, did I mention that Luke’s father was the Mayor of Ravenswood? Something fishy is going on there.

Of course to freak me out even more, Miranda shows up at the end! I freaked out all episode long about her dying and she shows up after Caleb read the letter from her mom. How is it possible that Miranda is still around? Miranda is dead! I know it’s a creepy town, but still. I barely knew Miranda, but I was still felt sad for her. She was stuck and really scared. I did get a little teary eyed when Caleb apologized to Miranda for not being able to save her. That dream that Caleb had, had to be Miranda trying to get through to him. They barely knew each other, but the bond they share is interesting.

So, what did you guys think of the episode? Are you hooked yet? Or do you need a little more convincing? Who do you think the curse will get next? If the curse is getting everyone one by one, who will be left at the end of the season? Sound off below.