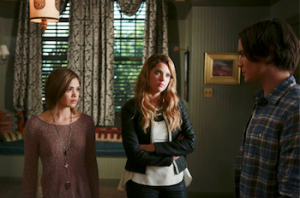 So many things happened during the winter finale of Ravenswood that my head is literally spinning. I don’t even know where to begin. All season long this show brought the scares and this episode was no different.

First off, Dillon killed Mr. Matheson! That scene really terrified me. I really didn’t know what to expect when Remy, Luke, and Olivia went inside Mr. Matheson’s office but when they walked out and saw Ryan, bloody eyes guy, I knew things weren’t good. So Mr. Matheson knew about the pact. Very Interesting. Dillon had come to see Mr. Matheson and proceeded to stab him! Dillon put Rochelle’s coat, gloves and the knife in his bag and left. What a piece of garbage. I’m was actually really happy that Dillon ran off  from the chapel and ran into Max in the woods. When she told him she was going to help him get away I knew something was going to happen. Dillon ended up tripping and falling on the train tracks and got run over by a train. Can’t say I’m all that sad about his demise.

I felt horrible for Olivia. Poor girl watched her boyfriend stab her own father. I actually cheered her on when she said she didn’t want the police to find Dillon. She wanted to find him and kill him. How is she supposed to deal with the fact that her boyfriend killed her father?

Hanna ended up coming to Ravenswood to see Caleb. Actually, Hanna originally came to talk to Miranda, but that would be impossible. Caleb finally told Hanna the truth about Miranda, that she was dead and that she was still there and he talks to her… that’s normal right? Of course Hanna didn’t believe Caleb. Who could blame her? I know I would have a hard time with that one.

Hanna: “I will crack your skull with a hammer if you say it’s complicated.”

Hanna ended up seeing Grunwald and Hanna told her that Caleb talks to Miranda. Grunwald was able to convince Hanna to stay a little while longer. Hanna then went to see Caleb again and told him the real reason she came to town was to fight Miranda. Okay, who would win in a fight, Hanna or Miranda? Go! When Caleb went off to talk to Luke on the phone (I assumed it was Luke), creepy child Max started talking to Hanna. Max convinced Hanna to come meet her friend. Caleb saw Hanna go off and ran after her. Of course Hanna was growing frustrated with Caleb and his lies. She just wanted to know what was going on.

Of course, this being Ravenswood we got to see creepy spider lady at the ice cream truck. Yum, I always like my ice cream with a side of spider.

Later on, Hanna was at the Collins place “talking” to Miranda. That scene was one of my favourites from the finale. Hanna said she was sure Caleb was in love with Miranda by what he said when he got back to Rosewood. It was such a sweet scene between the two of them. I really wished Hanna could have heard Miranda’s side of their “conversation.” I felt so bad for both Hanna and Miranda. Miranda is in love with Caleb, but Caleb is in love with Hanna and has always been trying to keep her safe.

Miranda: “He made you a promise. He’s just trying to keep it.”

Remy went home to find her father and of course the lights went out in her house. I knew something was going to happen, I just didn’t think Dillon would have showed up, knocked her out and dragged her body out of the house. That boy… Well, he got what was coming to him. Then Caleb heard about Remy going missing and proceeded to run to Raymond’s office and told him.

There we learned some interesting things. Raymond didn’t know Dillon killed Mr. Matheson. Raymond told Caleb that the Collins men were always the ones to keep the children of the pact, hence the hair in the jars. Keeping the souls in escrow, as Caleb put it, until the contract was complete. Raymond told him whoever questioned the pact always got death. As hard as it was for Raymond, he sent Miranda away on purpose to protect her from everything. So after I went back and forth this entire time, Raymond was in fact a good guy after all. Creepy Collins no more!

The group then went to the chapel and found Dillon and Remy. Spider lady showed up and called Dillon her faithful servant. Then spider lady revealed herself to be Abaddon. We were then led to a showdown between Collins and Abaddon. Abaddon was then bringing Miranda back to life but Raymond wasn’t going to let that happen. Raymond told the group that Abaddon needed Miranda alive to kill the rest of them. They all needed to die together. Raymond ended up smashing Original Caleb’s jar to set him free.

Raymond: “She can come back but not this way.”

It was sad to see Hanna leaving town, but it was the best thing for her. She knew that and knew why Caleb needed to stay in Ravenswood. I wonder what’s next for these two?

Hanna: “I don’t think that the smart thing will make me as happy as you do.”

Hanna: “We know how to keep secrets.”

With all the craziness, I’m happy we ended on such a sweet note with Original Caleb and Miranda. Original Caleb saw Miranda on the park bench, then we were treated to a flashback between him and Original Miranda.  What a way to go out. I hope you all enjoyed the winter finale as much as I did. I’m just so happy we got answers and I’m ecstatic that Miranda has someone she can actually feel. I can’t wait to see what else the Ravenswood crew has up their sleeves.