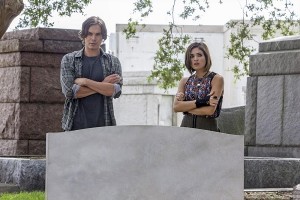 The supernatural drama had been given a straight-to-series order last year, but never reached the success of it’s inspiration, PLL.  The cancellation means that the show’s February 4th episode not only completed the 10-episode freshman season, but also the series.

Ravenswood focused on a town in Pennsylvania, which has been under a curse for generations.  Five strangers found themselves connected by this curve and set to investigating the town’s mysterious history.

Will you miss Ravenswood?