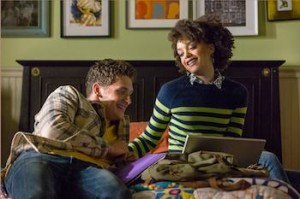 Every week my opinion of Raymond Collins changes and Tuesday’s episode “Along Came a Spider” was no different. Just when I think the guy is evil, he does something nice to change my opinion, then he’s shady again and I don’t know what to think. First off, Collins replaced Luke and Olivia’s father’s vandalized headstone and continuously visited her in jail. They had quite the sweet moment reminiscing of old times. Apparently Rochelle made school tolerable for Ray. I really thought that scene humanized Raymond.

Raymond even posted Rochelle’s bail and she was able to get home to Luke and Olivia. Just when I thought he was such a nice guy and maybe these crazy kids would maybe find happiness together if that’s what they both wanted, Remy sees Raymond and Dillon in a car and it was pretty obvious Collins was not happy with Dillion. Oh boy! Both of them saw Remy and they drove off. Evil Collins is back on the table for me.

Speaking of Dillon, that guy is no good! Dillon finally showed up to Olivia’s house. Apparently Dillon’s parents shipped him off to Ministry camp. Dillon’s mom freaked out because she found condoms in his drawer. Olivia spilled to Dillon that Springer told her that Dillon made him put the knife that killed her father in Olivia’s backyard. Olivia was so confident in that scene, I was actually really proud of her. Then Dillon worked his charms over her. I literally yelled at my tv screen, “Don’t believe him Olivia!” That boy is cute, but proved to be bad news.

Luke confronted Dillon in the locker room at school. Freaky moment, Dillon yelled out loud and I believe the shower heads exploded off.

So, Caleb started school. Yay! Some girls noticed Caleb talking to himself, because they obviously can’t see that he was talking to Miranda. I actually really liked that scene. It injected some much needed humour. Mr. Price or as I call him Mr. Hottie teacher, Caleb’s history teacher told him to be careful while working for Mr. Collins. Hmmm, ok.

Caleb later went to Collins office and begun rummaging through his things to find the keys to the small chapel on the property. When Caleb came back out, the body that was on the table wasn’t there anymore and he saw a ghost face in a jar and things started to shake and jars started to explode and he wasn’t able to exit the embalming room. Sometimes I have no idea what’s going on in this show.

Later on, Caleb and Miranda went inside the chapel. While in there a light from the window shined down on the ground and names appeared. Scudder, Dalton, Sanders, Watterman, Rivers, and Baker. The same names from Remy’s dream. Those were the names of the Elders that signed the pact. It just so happened that Dillon’s last name is Sanders.

The part that really gave me the chills was when Caleb went back in the chapel we saw the woman we had seen at the beginning of the episode with the spider coming out of her face. She disappeared and Caleb saw spiders all over the ground. What is happening?

Other tidbits in this episode. Remy got into some big trouble with her father. Remy had visited Springer in the hospital and she wanted him to come forward and tell the truth about the knife to the police. Remy ended up writing an article in the Gazette about Springer’s dad in exchange for him to tell the police. Well! Remy’s dad wasn’t too happy and he fired her from the paper.

I thought it was a really sweet moment when Miranda convinced Olivia to let Raymond help out Rochelle. Miranda told her Raymond was somewhat human and that he seemed to really care for Rochelle. I was inclined to believe that, until the end of the episode. I’m not sure about anything anymore.

With the winter finale airing next week, I really hope we get more answers because all of these questions are driving me mad!

What did you guys think of the episode? Bummed that there was no Grunwald this episode? I was! Sound off below!