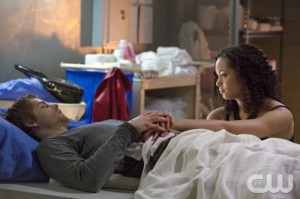 Before Stephen became aware of his powers and the significance of his standing in the world of the Tomorrow People, Astrid was his rock, the one person he was able to lean on and use as a sounding board for the internal struggles he had. After the comfort level with his powers increased, her role in his life was to keep him grounded, one foot in the world of humanity, and serve as a reminder of who he was before all this happened. However, Astrid has also become Stephen’s Achilles heel, a valuable asset that could easily be picked off if a rogue break-out wanted to inflict damage or if Jedikiah wanted to tighten Ultra’s grip on his nephew’s psyche.

On tonight’s episode of The Tomorrow People, an interaction with Astrid has increased the hostility between Stephen and Hillary, as Hillary witnessed him teleporting with Astrid in the middle of the street. With her competitiveness still in overdrive and her survival instinct kicking into high gear due to the competition between aspiring Ultra agents, Hillary feels as if this is an unfair advantage that Stephen has and that she needs to weaken him in any way she can in order to build herself up. However, rather than simply cut his chances at being an agent off at the knees, she’s potentially putting an innocent girl in danger, the type of collateral damage that can stay with even the most hardened of agents for years to come. Is Hillary prepared to have Astrid’s blood on her hands all in the name of her own survival?

Elsewhere on The Tomorrow People, Stephen’s uneasy about being invited on a family camping trip with Peter, so he enlists John and Cara to help watch over Astrid while he’s gone.

Why do you think Peter has shown so much interest in Stephen’s mother? Will Astrid be safe while Stephen is off camping? How would she react to coming into closer contact with other members of the Tomorrow People?