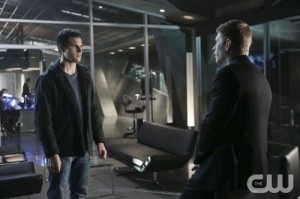 What makes John’s backstory on The Tomorrow People so profound is that he has no one around who understands the depths of what he’s been through. While there’s a certain understanding about the baser elements of what it means to be a Tomorrow Person and the journey they all took to get where they are, no one else was impacted by the Annex Project as much as him; he can’t unload the guilt on his shoulders because there’s no one that knows its extent. However, as lonely as he may feel sometimes, it’s better to have that chapter of the Tomorrow People history stay in the past and not pop its head up, as allowing murder to go in between his people would only set them up for failure in their cause for liberation.

On the next episode of The Tomorrow People, Cara and Russell track a break-out who has the ability to kill without recourse, something the former attributes to a possible evolutionary mutation rather than anything to do with Ultra. Regardless of whether the latest break-out to hit their radar is the result of Ultra resuming the Annex Project or of some hocus pocus from Mother Nature, the Tomorrow People need to corral them and fast, since their ability to kill could be harnessed into a weapon like Ultra tried to do with John. If they’re not able to neutralize this latest break-out, things could become very dicey for the Tomorrow People, with one of their own being turned against them and used to decimate their ranks. But even if they do figure out a way to protect themselves from the damage the break-out could cause, what’s to stop another souped up Tomorrow Person from barreling toward them in the near future? And then another? And then another?

Elsewhere on The Tomorrow People, Stephen attempts to make a deal with Jedikiah, while a secret technology that could change the future is on Ultra’s radar.

How would the restoration of the Annex Project impact the Tomorrow People’s quest for social equality? What type of deal do you think Stephen will be looking to make with Jedikiah? In what ways will the Jameson family change now that Stephen knows that his mother has powers?