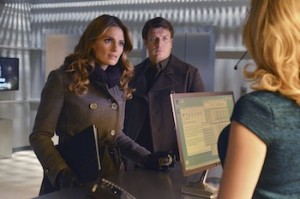 After last Monday’s amazing episode, this week’s episode of Castle really held its own. Monday night’s episode was the first for Adam Frost and I thought he did a great job. I can’t wait to see more from him. I thought “Room 147” was pretty case heavy and I usually don’t really enjoy those but we got some really great character moments that I’ve been wanting to see for a while so I didn’t really mind. Plus the case was really intriguing, so that helped. All in all, I really liked the episode.

I really won’t go into great detail about the case, but the way it was broken down was great, and pretty hilarious at times. I thought it was really cool that Kelly Kruger guest starred this week as Laura, since I used to watch her as Mackenzie Browning on The Young and the Restless. She’s also from Montreal, where I live so that was pretty cool.

Monday night’s episode had quite the historic moment. Castle was completely theoryless! No crazy theory! That’s just not natural. Well, later on he did come up with something pretty interesting that gave us this hilarious moment between Castle and Beckett.

Kate: “Castle, no please. If this is some alternate universe theory I’m not in the mood.”

Castle: “Really? Alternate universe, that’s how little you think of me?”

Castle: “No, they’re psychically linked and not just to each other. But to the actual killer. So they’ve seen the crime through his or her eyes and the experience is so visual that both Sam and Anita think that they committed the crime by themselves.”

Castle: “Yeah yeah yeah. You know how I like the weird stuff.”

I just loved how frustrated Kate got every time another person came into the precinct to confess to killing Justin.

Kate: “If I have to hear that confession one more time, I’m gonna shoot somebody.”

I have to say, it was pretty hilarious and Stana was great! It was bad enough they had two people confessing to the murder of Justin Marquette, but then they got a third! Poor Dwight. The guy didn’t even get a chance to confess.

Dwight: “I need to confess!”

Even at the end of the episode Dwight still wanted to confess. Poor guy felt left out. Great job by Bradford Anderson, another daytime alum.

Oh! How great was it that Dr. Holloway was brought back? I’m sure you all remember Dr. Holloway from Season 2 Episode 6 “The Vampire Weekend.”

Dr. Holloway: “I will arrange for someone from Social Services to come get Mr. Lockerby. And if you want, I can have someone get him, too.”

I love when the show does a throwback to past episodes. Castle always does such a great job with those.

I’m pretty sure I wasn’t the only one that loved the scene between Kate and Alexis. I’ve been waiting for that moment for a really long time and it was perfect. At the beginning of the episode Alexis ended up staying over at the loft and Castle suggested Alexis just move back home. Alexis said no but there was definitely another reason she wasn’t going to come home. Kate sensed something wasn’t right and later met up with Alexis.

This moment brought me back to S6 EP7 “Like Father, Like Daughter” when Beckett spoke to Lanie about Castle’s relationship with Alexis.

Kate: “He and Alexis have this whole history that has nothing to do with me and it kind of feels like when it comes to the two of them, I’m always gonna be on the outside.”

Kate really stepped up and reached out to Alexis and it made me so happy.

Kate: “And you also said that there were other reasons why you didn’t want to move back and I just… I wanna make sure that one of those reasons isn’t me.”

Kate: “Cause the last thing I wanna do is make you feel unwelcome in your own home.”

I loved that Kate met up with Alexis. Kate wanted to know why Alexis didn’t want to move back home. Kate wanted to make sure it wasn’t because of her. Alexis didn’t want to move back because Castle was right. It was a mistake moving in with Pi and she didn’t want Castle to know that she made a mistake. I felt for Alexis  and I know where she was coming from. I hate showing my parents they were right about something. I’d rather suffer than wave the white flag in defeat. Alexis wished she could have seen it before and Kate, the wise one said it was because of the love haze.

Kate: “It’s like a drug. It makes intelligent people do stupid things.”

I think Alexis had to go through her Pi period even though it was excruciating for us and Castle at times. It’s all about growing up. We all makes mistakes, it’s how we deal with the aftermath that counts. I absolutely loved this sweet scene between Kate and Alexis. In fact, I love all scenes between those two. Kate usually just wants to help and doesn’t want to interfere. This was something we’d been missing for a while now. I know earlier in the season we got a really sweet moment between Alexis and Kate at the precinct but we didn’t get to hear their conversation. Stana and Molly are great together. Maybe now we’ll get more scenes with them.

At the end of the episode Alexis showed up and asked if she could come home. I’m glad that Alexis’ talk with Beckett worked and she reconsidered coming home. The smile on Castle’s face was pure magic. Now things should be interesting with everyone under the same roof. Hijinks ensue! I say they should all play a game of laser tag. Maybe Beckett will defeat the forces of Voltar? A girl can dream.

What did you guys think of this week’s episode? Sound off below.

Castle: “11 seconds to a confession. That’s got to be your personal best.”

Castle: “You should know you’re engaged to a genius.”

Kate: “Yes, a genius at annoying me.”

Castle: “Do I smell coffee?”

Kate: “Yeah, I think we all just kickstarted our day.”

Kate: “It’s okay Castle, you know I like the weird ones.”

Kate: “How do you know what I do to you while you’re sleeping.”