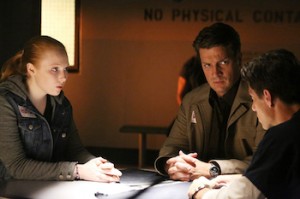 Justice prevailed and the good guy won on Monday’s episode of Castle perfectly titled, “Like Father, Like Daughter.”  Alexis’ passion and determination to save Frank from his execution was inspiring. Castle and Alexis working on the case together helped repair their strained relationship, and get justice for Kim’s murder. Molly Quinn was phenomenal and she showcased what an incredible talent she truly is.

When it’s come to Caskett, we really haven’t had that many moments lately, but when we have gotten them, they’re perfection. Kate and Rick discussing wedding venues was adorable. Ever since they got engaged I’ve been waiting for this discussion between the two of them. Of course Castle would suggest getting married in space. The guy has property on the moon. Why wouldn’t he want to get married in space?

Beckett: I am not getting married in space.

Castle: Why not? We could be the first. Commercial space flight is only a couple years away and you said you wanted it to be special.

Beckett: Yes, because when I was a little girl imagining my wedding day being stuck in a small tin can with a thousand ton of rocket fuel strapped to my ass was exactly what I had in mind.

The case this week was probably one of my favourites Castle has ever done. I don’t know why, but I love death row cases. They always have such a sense of urgency and intensity to them. Even though Alexis still wasn’t talking to Castle and she already exhausted all other avenues, she realized she had no other choice but to go to Castle for help about the case. I get that Alexis was still mad at Castle, but it hurt me that she was so snippy towards him. I’m glad as the case went on she warmed up towards him. I’m going to be all corny and say Alexis and Castle working together was like them against the world.

Monday’s episode proved that Alexis is definitely her father’s daughter. Castle never gives up and neither does Alexis. You really had to applaud her determination to get justice and help free Frank before his execution. Alexis has really grown into her own and she’s not a little girl anymore. Even though Frank wanted to give up, Alexis wasn’t going to. She was so determined, and so emotional. My heart was breaking for her.

Thanks to Alexis and Castle’s determination they got to the truth and what a twist that truth was! That whole time Frank believed he was covering for his brother John for the murder of Kim. Thanks to Castle and Alexis’ and the rest of the team, we learned that police officer Lane was the real killer. That same police officer that was so rude to Alexis and Castle earlier in the episode. The look on his face as he was being found out was priceless. Justice was served!

I loved an earlier scene in the episode when Castle called Beckett totally freaked out about not being able to help Frank. Kate always has this amazing way of calming Castle down. Kate saying she was there for Castle and Alexis was so sweet. I loved that Kate took it upon herself to get that evidence to Lanie, something Alexis could have done if she would have just asked. Lanie convinced a contact to run the evidence after hours. I love that during this episode we got to see so much of Lanie. Much more than the whole season so far combined.

Speaking of Lanie, thank you Castle writers for having Kate voice her concerns to Lanie about feeling like an outsider with Castle and Alexis. I just wish Kate had voiced her concerns to Castle. I’ll take what I can get. Kate feeling like an outsider brought me back to S3 EP5, “Anatomy of A Murder.” Gina felt the exact same way as Beckett. “You built a wall around Alexis like you didn’t want anyone else to be close to her. When it came to the two of you I was on the outside looking in. I don’t want to feel like an outsider anymore.” You could tell Kate was hurt that Alexis went to everyone else about the case, but her. I can understand where Kate was coming from. Kate is about to become a part of the family, and Alexis is shutting her out. I’m not sure if Alexis was doing that because she was mad at her father or if there was something else going on. Alexis and Kate have always had a good relationship. Remember when Alexis went to Kate and asked about her semester abroad? Alexis also helped Kate with Castle’s surprise last season. I was just so elated that Alexis went to Kate at the end of the episode and apologized. We didn’t get to hear their conversation but from what we saw they spoke and hugged and whatever differences Alexis had with Kate, everything was good now. I couldn’t help but tear up when they hugged and Castle smiled.

“Like Father, Like Daughter” was one of my favourite episodes this season. We learned the apple doesn’t fall too far from the tree and Alexis is quite the seeker of justice. I’m also very happy that Alexis apologized to Castle. The strain between them was killing me. Now that Alexis and Castle have repaired their relationship, they all can move forward. I’m not sure about anyone else, but I could really see Alexis doing the same work as Johanna Beckett. Defending people who normally go overlooked and getting to the truth. I just can’t wait until Castle and Beckett really start planning their wedding. You know Castle is going to have many more wacky ideas and having their wedding in space was just the beginning.

“So you some kind of lawyer?” – Frank

“Now that was weird. Usually I do that with Beckett” – Castle

“She hasn’t gone to Perlmutter yet.” – Lanie

What did you guys think of the episode? To the ones that have been annoyed by Alexis lately, did this episode change your mind? Sound off below.