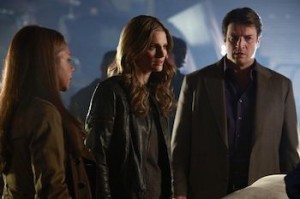 Rob Hanning, Terence Paul Winter and Rob Bowman I love you, I really love you. “Veritas” was an edge of your seat, insanely intense epic episode! One of the best episodes of Castle ever. One of the best episodes of television ever. I’m shaking just thinking about the episode. Stana Katic showcases once again what a powerhouse she is. From the second the episode began I was in complete awe. There is nothing she cannot do.

From the moment Vulcan Simmons appeared in this episode, I just knew things were going to get real messy. I just didn’t realize to what degree. Kate had been following this guy Jason Marks since about March. Well, that’s what the close up of her journal indicated. Jason, who Kate and Rick had been investigating in regards to her mother’s murder turned up dead and Vulcan Simmons who Kate saw driving Jason turned up dead as well.

As if things weren’t already intense, it got much worse when Lanie delivered the news to Kate that the one bullet that was found in Simmons came from a pistol registered to Kate. Simmons was killed with Kate’s backup piece that was in her safe at home. I was shaking just like Lanie was when she was giving the news to Kate. I just couldn’t believe it. There was no way Kate killed Simmons. I know Kate, she would never do such a thing. There was only one person that could have set all this up.

Later on, Castle came up with the theory that maybe our old dead friend Mr. Smith wasn’t actually dead at all. Could that possibly be? Well, Smith called Castle’s burner phone, and I’m pretty sure dead people cannot make telephone calls. Did anyone else get the shivers when Castle and Kate met with Smith in the parking garage? Smith told the two that he was close to bringing Jason into the fold but that someone found out and had him killed. First Jason, then Simmons. What was going on?

Intense doesn’t even begin to explain this episode. It was just one thing after another. There were so many heart pumping, intense moments but the swing sets moment definitely warmed my heart. A hooded Kate meeting Rick. Aw, just so awww. Anytime this show brings out the swings you know it’s going to be a great moment. Another great moment was when Espo and Ryan told Gates everything about Kate’s mother’s murder. I thought it was about time Gates knew what was going on. If Gates was going to do anything she could to protect Beckett, she needed to know the truth.

It was only a matter of time before Bracken found Kate and he made his move once Castle left the hotel room to get a car. I loved how Kate told Bracken to kill her if he had the balls to do so. Which we all know he doesn’t. He always makes other people do his dirty work. His two thugs made Kate swallow a pill that would relax her and then proceeded to feeding her booze. They were obviously making it look like some kind of suicide, but not so fast! Kate didn’t swallow the pill and took down both men. Did they really think Kate was going to go down without a fight? Kate did get smashed in the head but Castle showed up just in time and they took off.

I can’t even choose a favourite moment from this episode since the entire episode was incredible but I got some serious chills when Kate had a flashback to meeting Captain Montgomery for the first time. Kate was looking for her mother’s file and Kate didn’t realize it but back then, Montgomery was giving her a clue as to where the recording of Bracken confessing was. It turns out Montgomery gave Johanna the recording! Can you believe it? I was in shock.

Kate and Rick were able to get into Kate’s apartment to look through her mom’s stuff thanks to Ryan and Espo but Capt. Marcus Donovan came busting in before they could get out. The following sequence of events were absolutely brilliant. One of the best moments of the entire series. Kate was going through everything in her head and it donned on her. The famous elephants on Kate’s desk were her mom’s. Johanna used to have them on her desk and she used to say they were a family just like Kate, her mom, and her dad. “D ME w/ family” didn’t mean dinner with family, it actually meant Detective Montgomery, evidence w/ family. The tape was in one of the elephants!!!! Seeing Kate trying to crack open one of the elephants then the tape falling to the ground was so amazing. Even more amazing? Hearing Bracken confessing to everything on that tape.

It was so incredibly satisfying seeing Kate walk through those doors and seeing the complete shock on Bracken’s face. Kate had the honour of arresting Bracken for conspiracy, fraud and murder of her mother Johanna Beckett and all in front of the media. Bracken was going down and it was Beckett who got to deliver the final blow. What a moment for Beckett. Finally! That part of her life can be put to rest.

“I never could have done this without you.” – Beckett

A perfect ending to an amazing episode. I just can’t believe the whole thing. The recording was in the elephant the entire time! I am in shock. Mind blown. The Castle team has done it once again. I must add “Veritas” to the list of all time favourite Castle episodes. Let’s be honest, that list is really crowded, but this one will definitely go down as one of the Castle greats.

I’m just so glad we got to hear LT say a couple lines of dialogue. Go LT!

I’m going to definitely savour this episode a lot more before I think about next week’s finale. I can’t believe the season is almost over. It has been an incredible season, and I’m confident Milmar have an epic finale planned for us.