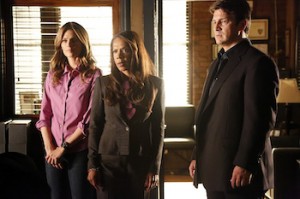 Castle, you’ve done it again! The Castle team has been hitting these episodes out of the park and Monday night’s episode was no different. “The Greater Good” put the spotlight on Captain Gates, something this Castle fan has been waiting a very long time for. We got to really see Penny Johnson Jerald flex those acting muscles and she definitely did not disappoint.

From the moment I saw the promo for this episode I was ecstatic that Salli Richardson-Whitfield was guest starring as Gates’ sister Elizabeth. I’ve been a huge fan of Salli’s since she was on Eureka and these two incredible women were fantastic together. Polar vortex didn’t even begin to explain how Gates and Elizabeth were to each other at the beginning of the episode. You definitely sensed something big happened between these two.

We got some indication early on that something definitely went down between these two and that it was job related.

Gates: “I am not stuck anywhere. I will not apologize for doing my job to the letter of the law.”

We learned later on when Beckett was talking to Gates about Elizabeth, that Gates screwed up one of Elizabeth’s investigations. Back when Gates was the head of Internal Affairs, Elizabeth was trying to make her case and she begged Gates not to mess with her case. Gates chose her job because that’s who Gates is and we love her for it. Things haven’t been the same between the sisters since. I felt so bad for Gates because she seemed genuinely sad about the rift with her sister. Gates was only doing her job, but I could see where Elizabeth would have resentment towards her sister. They were the dynamic duo for goodness sake. Could you imagine the good they could have done together?

I just loved that Beckett and Gates scene so much. Such a beautiful bonding scene between them. Stana and Penny have such great chemistry together. This whole cast does. That’s what I love most about this show. All the actors have such amazing chemistry together and they really do love their jobs and it really translates on the screen.

The scene that really got to me was short but it packed quite a punch. When Gates was working late she opened up her desk drawer to reveal a picture of her and her sister. So much emotion in that moment. If you didn’t already love Gates, I’m sure after this scene you will. Yeah, she’s a hard ass sometimes, but she’s just trying to do her job. Even though she probably wasn’t talking to her sister, she was always thinking about her.

In the end, the team got their murderer and it was someone I didn’t even suspect. Turns out, our victim Peter Cordero took the 25 million from his boss and was going to run away. Stephanie, who was working with Elizabeth at the U.S. Attorney’s office listened to Cordero’s last recording and heard he was going to leave town. Stephanie couldn’t let Cordero do that and shot him. Such a shame. At least Peter donated a large portion of the money he took to rebuild his hometown that was destroyed by the earthquake that killed his parents.

I was so happy when Elizabeth thanked Gates for doing her job so well. The same thing that got between them in the first place. I was glad the sisters could put the past behind them. I really hope we get to see them work a case together again. I thought Penny and Salli really nailed it this week. I just loved how Elizabeth kept on calling her Victoria. Such a change from Captain Gates, or Sir.

Other than the case, we got to enjoy more wedding planning. We learned that Kate will not get married up in space, on a slide or on a ride. I’ll admit, getting married on the Cyclone at Coney Island would be pretty awesome. I kid I kid. Castle and his crazy ideas always make me laugh.

They already have a song, and now they needed to make their list. The amount of people just kept on growing, but to be fair, Castle is world famous-ish. I absolutely loved Aunt Theresa getting mentioned and Castle commenting about what she wrote on Facebook. Hilarious throwback Castle writers. I love when they do that.

How many names did Castle and Beckett have? Like 500? Well, Martha had her own list! Things were getting a little out of hand but Castle and Beckett being who they are and this amazing communication thing they’ve got going on decided to figure this out once and for all. Kate asked, “Why are we having this wedding?” They are having the wedding for them, not for anyone else. I thought it was brilliant to write down everyone they wanted to be there in a minute. After about 2 seconds they stopped to reveal they both wrote “YOU” on their piece of paper.

Okay, everyone on the count of 3 say, AWWWWW. How adorable was that? I can’t even count how many incredibly sweet moments we’ve got between the two of them. Of course after this they started to actually make their list together. I’m not going to make any predictions about this wedding. I’m just going to sit back, relax, and enjoy the ride.

Soundbites from “The Greater Good”

Castle: “Hairy is my middle name. That sounded better in my head.”