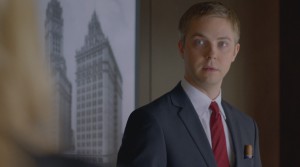 Elena never wanted to bring her Stonehaven problems to Toronto and get Philip involved in the life she so desperately tried to leave behind. The entire point of her fleeing New York and settling in Toronto was to put distance between herself and who she used to be and now she’s lured a series of dangerous men to the city where she got her start as a photographer, the city where she fell in love with a man she thought would help her live a normal life. As much as Elena wants to be human again and not have to worry about Mutts, Packs, and any kind of werewolf drama, there’s no chance that she’ll be able to give everything up and escape with her life.

On tonight’s episode of Bitten, that cinching of her mortality tightens even moreso when Olson and Santos burst into Philip’s apartment, thereby putting him in the center of the Pack’s conflict with the Mutts. Philip might not be directly involved or explicitly targeted, but he would make some supremely damaging collateral damage, a major loss that could help Santos and Olson bend Elena to their will by crushing any last hope she had of seeing peace and escaping the world of wolves. However, if Clay and Philip can fight off Santos and Olson, Elena will have the chance to completely separate herself from life in Toronto and give Philip the clean break necessary for them both to move on and begin the healing process – without either of them ending up in a hospital room or a morgue.

Elsewhere on Bitten, Elena embraces her kill instinct while working to free Clay from captivity and comes to terms with her true identity after Philip puts her in a difficult position,

Will Clay and Philip be able to protect Elena from LeBlanc and Santos? How will Elena feel after embracing who she is when she’s held her wolf at arm’s length for years? Could Elena coming to terms with who she is bring her closer to Clay?