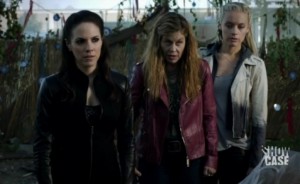 Bo has encountered quite a bit in the way of dangerous Fae since she entered a world that demanded she pick a side. However, thanks to her innate power and the assistance of her team of friends, she’s been able to keep her head above water and figure out why she’s being attacked and what she needs to do in order to emerge on top. It can be tough to make it in the Fae world, particularly for someone unaligned and with few ties, but Bo has made it work for this long and, even if she chooses to stay Dark, has proven that it is possible to stay unaligned.

On tonight’s episode of Lost Girl, Bo gets attacked by a Fae, but it’s a different situation in that she has no clue who sent it and why she was even targeted in the first place. Bo’s profile in the Fae world has been fairly low recently and she’s not really done anything to warrant someone coming at her like this; she’s spent much, if not all, of her time since she arrived back from Rainer’s train trying to piece together what happened between being kidnapped and arriving home and coming to terms with the physical, mental, and emotional impact that the kidnapping had on her. Bo of earlier seasons was not shy about mixing it up with the other Fae and being unafraid of showing the others what she could do and who they would be messing with her if they came for her. This Bo, though, has been decidedly introspective, meaning that whoever sent a Fae after her has a preexisting vendetta against her or is someone looking to making a splash in the Fae world by taking out the famed succubus.

Elsewhere on Lost Girl, Bo’s feelings for someone she loves begin to waver, while Kenzi receives a surprise visitor.

Who do you think sent the Fae to attack Bo? Will Kenzi’s surprise visitor be a good thing or could she be in danger?