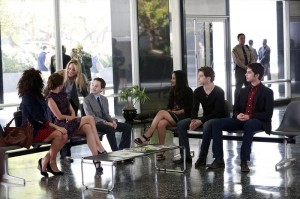 Ever since Jesus decided to go off his ADHD medication and use wrestling as an outlet for his extra energy, he’s been a much more volatile person while his schoolwork has suffered greatly. Taking the medication always made Jesus feel like an “other,” as if he wasn’t normal for tending to himself and trying to be the best Jesus Foster he could be; however, not being on the medicine has put him at odds with both family and friends, his attitude not the best and his performance both in the classroom and on the mat not much better. Still, he’s not going to make any great changes if it’s just his coach, a math teacher, and his mothers telling him what to do.

On the season finale of The Fosters, Mariana offers her brother some advice and points Jesus toward restarting his medication. It’s admirable that he has the ambition to want to get off the medication, but he’s just not the same person off it as he is on it and there’s no reason for everyone and everything else in his life to suffer due to his stubbornness and insecurity. Jesus was in a pretty decent place before deciding to get off his medication and now, he doesn’t have a girlfriend, Emma won’t speak with him, and his family has pointed out on multiple occasions how not taking his medication has made him change for the worse. Will hearing Mariana tell him that he needs to get back on the medication inspire Jesus to admit he was wrong? Or is he so defiant in his belief that he can “beat” ADHD that he won’t listen to her?

Elsewhere on The Fosters, Stef and Mike deal with the fallout from Brandon’s confession, while Callie contemplates her adoption, Jude gets asked on a date, and Mariana supports a friend during a difficult decision.

Will Jesus listen to Mariana and get back on his ADHD medication? Could Callie have any last minute second thoughts about the adoption? How will Brandon deal with Callie possibly becoming an official member of the Foster-Adams family?