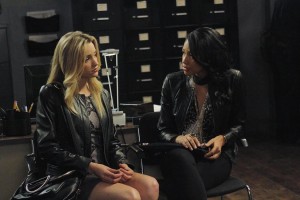 Lacey was put in an especially difficult position when Whitney kissed her following their venture into the city. What started as a quick little getaway sin to her mind off the stresses of Green Grove turned into something much more complicated, as she must now deal with the possibility that Whitney has real feelings for her. Even though Lacey’s only known Whitney for a short while, she wants to be sure to let her down gently and to preserve their budding friendship as best she can, especially since her friendships with Jo and Danny are all but nonexistent these days. However, even if she does find a way to let Whitney down without ruining their relationship, will things between them ever be the same?

On the next episode of Twisted, Lacey struggles with how exactly the approach the situation with Whitney. Though she wants to be a good friend to the new girl in Green Grove, she doesn’t want her to get the wrong idea or to let her on into thinking that there’s a chance of something romantic happening between them. There’s also the fact that Whitney has shown herself to be quite manipulative and that her gestures toward Lacey might be less genuine expressions of how she feels and more calculated moves to get what she wants. Of course, Lacey doesn’t know about this side of Whitney, but she needs to be careful about trusting anyone in Green Grove right now, not when she finds secrets and ulterior motives around every corner she turns.

Elsewhere on Twisted, Danny visits an old confidant looking for insight into the murder cover up, while Jo begins questioning Charlie’s motives and Tess receives shocking news just as she tries to move on with her life.

How do you think Lacey will handle Whitney’s feelings for her? Is Whitney being genuine with how she approaches Lacey or does she have an ulterior motive in making a move? What type of shocking news will Tess receive about her first biological daughter?