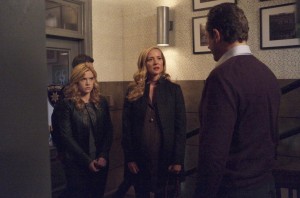 For one reason or another, Whitney was in no hurry to see her mother earlier this season on Twisted and went as far as telling Karen that her mother’s boyfriend made her uncomfortable with his sexual advances. Though that’s an allegation that Karen and Jack both took with grave importance, there was something not quite right about the way Whitney confessed, almost as if she pulled something like this out in order to avoid seeing her mother. She knew that Jack would protect her and that she would be kept in Green Grove for the foreseeable future, but unlike Charlie, Whitney didn’t have her eyes on taking over anyone’s life and didn’t have the type of history with anyone in town to be so apprehensive about leaving. Therefore, there has to be something between her and her mother that forced her to play the card she did, something that will likely come out once her mother comes to town looking to bring her home.

Listed below are the date, title, and description of the season finale of Twisted.

Tuesday, April 1st – “A Tale of Two Confessions”
Kyle’s investigation culminates with a series of shocking and contradictory confessions and potentially deadly consequences. The complicated triangle between Jo, Danny and Charlie comes to a shocking head. Karen and Tess uncover more of Vikram’s secrets, including a piece of evidence that has major implications for Tess and the Masterson family. Meanwhile, Whitney’s mother Gretchen (Elaine Hendrix) shows up to bring her daughter back to the city, and her candor about Whitney’s past causes Lacey to question her friend. And Rico makes a major faux pas in his first meeting with Andie’s parents.

Twisted airs Tuesdays at 9:00 on ABC Family. You can check out sneak peeks of the season finale here.

What do you think will happen on the Twisted season finale? Which character did Tess give up for adoption more than a decade ago? Could someone other than Charlie have been in on the conspiracy to stage Vikram’s accident?