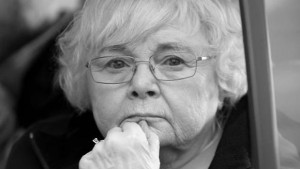 Lifetime has announced that Oscar nominee June Squibb (Nebraska) has signed on for a recurring role on Devious Maids. She’ll be playing Velma, the mother of Genevieve, in a two-episode arc later this season on the soap, which became Lifetime’s fastest growing series this past summer.

Season two of Devious Maids will find a crime spree hitting Beverly Hills, leaving each of the maids feeling vulnerable. While Marisol engages in a romance with a man whose secrets have a hard time staying buried, Zoila’s controlling ways continue pushing Valentina away, this time into the home of a surprising employer; Rosie’s immigration status remains in flux following Peri contacting ICE; and Carmen gets a taste of the limelight now that she’s engaged to Alejandro.

In addition to her role in the Alexander Payne road movie, Squibb has appeared on the likes of Getting On, The Millers, and Castle. She joins a show that will be looking a bit different when its second season premieres, as Devious Maids cut three season one cast members and added several newcomers, including Joanna P. Adler (Orange is the New Black), Mark Deklin (GCB), and Dominic Adams (Romancing the Joan).

The second season of Devious Maids is set to premiere Sunday, April 20th at 10:00 on Lifetime. You can check out a recap of the first season finale here.

Will you be watching Devious Maids this season? What kind of character do you expect Velma to be? Are you surprised that the show was able to get such an in-demand actress?