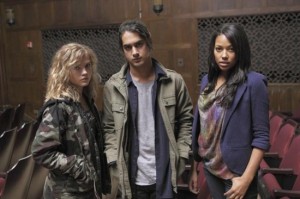 Per The Hollywood Reporter, ABC Family has cancelled teen mystery Twisted after one season.

The decision isn’t much of a surprise, considering that it took four months for the network to come to a decision about the show’s fate. ABC Family had a similar delay for Bunheads and The Lying Game last summer, a delay they said was to due to wanting to see how their new summer shows did, with the same result – both veterans were cancelled while then-newcomers Twisted and The Fosters received episode extensions.

Twisted was also hamstrung by the fact that Ravenswood failed to take off in the fall. Rather than get to air the second half of its season with its fellow mystery series, the series had its season 1B debut delayed one month and had to air episodes without an original lead-in, leading its ratings to plummet. With the delay likely pushing any new episodes of Twisted into 2015, Avan Jogia taking the lead role in an upcoming Spike TV miniseries, and three promising pilots in development, ABC Family opted to take the ratings weakness they saw as gospel and end the series without a concrete finale.

Created by Adam Milch, Twisted followed 16-year-old Danny Desai (Jogia), a boy sent to juvenile hall for five years following the death of his aunt, which he was blamed for. Once he returns to his hometown, he doesn’t exactly receive a welcoming reception, though he ultimately wins back his two best friends and looks to live the life that was taken away from him. In addition to Jogia, Twisted starred Maddie Hasson, Kylie Bunbury, Ashton Moio, and Denise Richards.

The final episode of Twisted aired this past April.

Will you miss Twisted? Do you think ABC Family should have renewed the show? Who do you think was shot in the closing moments of the series?