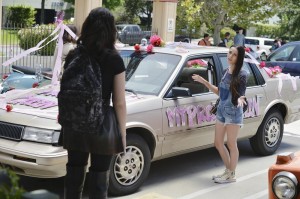 ABC Family has renewed critically-acclaimed drama Switched at Birth for a fourth season after ranking as cable TV’s #1 series in its time period in key female demos. No episode order has been revealed as of yet, though season four is set to premiere in January 2015.

“Fans will be clamoring for season four and to know what happens with Daphne and Bay after the season three finale next week,” said Tom Ascheim, President ABC Family.

Switched at Birth is the first renewal decision ABC Family has made this month. While The Fosters and Chasing Life likely won’t have their fates determined until 2015, as they have the second halves of their second and first seasons, respectively, still to air, the fates of Twisted, Young & Hungry, and Mystery Girls are still up in the air. The former finished its first season this past April, while the latter two will culminate their first seasons later this month. There’s also the matter of the network’s three drama pilots, which include a brother-sister tennis story and the journey of an addict, with the shows going to series likely to be announced this month, as well.

The third season finale of Switched at Birth is set to air Monday at 9:00 on ABC Family. You can check out a sneak peek from the finale below.

What have you thought about the third season of Switched at Birth? Where would you like the show to go during its fourth season? Should ABC Family move the show after its ratings softened this summer?