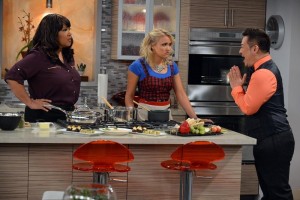 The former stars Emily Osment (Hannah Montana) as excitable food blogger Gabi, who gets hired on as the personal chef to tech magnet Josh (Jonathan Sadowski). However, Josh’s personal assistant Elliot (Rex Lee) doesn’t think that she’s qualified enough for the job, preferring a celebrity chef to work with his client rather than a young amateur, and Gabi is forced to prove her talents and give herself enough cushion to learn on the job. Young & Hungry also stars Aimee Carrero (The Americans) as Gabi’s best friend Sofia and Kym Whitley (Animal Practice) as Josh’s housekeeper Yolanda.

The latter tells the story of Charlie Contour (Jennie Garth) and Holly Hamilton (Tori Spelling), former co-stars of a detective series who have gone their separate ways since the show wrapped. While Charlie has settled into the suburbs, becoming a wife and mother, Holly is still hanging on to the notion that she can regain the fame she’s lost. Both of their lives are disrupted, though, when they’re called in on a real crime, as a superfan of their series (Miguel Pinzon) who witnessed a crime will only confide in them. Will this be the catalyst for Holly and Charlie to put decades of silence behind them and fall back into their old dynamic? Or is Charlie simply too far removed from the Hollywood scene to be willing to engage her former friend?

Young & Hungry is set to premiere Wednesday, June 25th at 8:00 on ABC Family, with Mystery Girls following at 8:30. You can check out an additional preview for each series here.

Will you be watching Young & Hungry and/or Mystery Girls? Do the extended previews give you a better idea about what to expect from each series? Should ABC have paired their upcoming summer comedies with both Baby Daddy and Melissa & Joey, creating a full night of comedy?