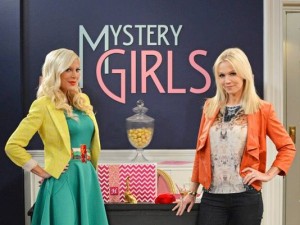 The first, based on Mexican telenovela Terminales, tells the story of April, an ambitious 20-something journalist whose life seems to be coming together. She’s landed her dream job at a local newspaper; her relationships with her family have strengthened since she made it out of her teens and struck out on her own, finding herself while in college; and she’s begun a relationship with a co-worker that seems like it could turn into something special. However, once she discovers she has cancer, her world crashes in around her and she realizes that there’s a chance she might lose everything she’s worked so hard for.

The second stars Emily Osment (Hannah Montana) as enthusiastic food blogger Gabi, who gets hired as the personal chef of tech whiz Josh (Jonathan Sadowski). Gabi must then prove that her knowledge of food extends beyond the internet and that she, not the celebrity chef that Josh and his personal assistant Elliot (Rex Lee) want, is the right person for the job.

Finally, Mystery Girls tells the story of Charlie (Jennie Garth) and Holly (Tori Spelling), two former co-stars of a mystery series who are reunited after decades apart by a real life crime. The witness, a fanatic of the show Charlie and Holly starred in, will only speak to them and the two will have to use their crime-solving skills to help bring the culprit to justice and repair their friendship in the process.

Which new ABC Family shows will you be watching this summer? Do you think Chasing Life can find an audience on a network known for its sudsier fare? Are you excited to see Jennie Garth and Tori Spelling reunited on television?