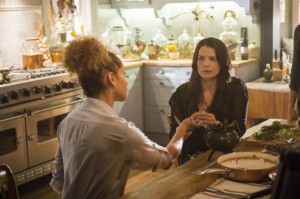 Though she was worried about what could’ve been behind the murders that hit East End, Joanna knew that she would be able to handle whatever crossed through the portal with Frederick. She’s not lived a long time by luck, having built herself into one of the most fearsome witches in Asgard before leaving and beginning a life away from the king, and there was very little that could threaten her. However, the seemingly immortal Mandragora is one of those things that could hurt her and it took long enough to piece together its presence in East End that it kidnapped Ingrid.

On the next episode of Witches of East End, Joanna enlists Alex to help her locate the Mandragora and bring back Ingrid. While Alex is one of the few people to have tangled with a Mandragora and live to tell the tale, her knowledge of how to defeat the creature might not be as handy now that Ingrid is its mate and therefore would die if the two killed the Mandragora. Weaponry and sheer force of will aren’t going to bring Ingrid home and cut the ties that bind her to the Mandragora; it’s the depth and intricacy of Joanna’s knowledge of magic and the extent in which Alex has keyed in on the Mandragora’s weaknesses. They might not be able to come charging with the intent to kill, but they can outthink the creature and lure it into a trap that will strip it of its connection to Ingrid and give Joanna her daughter back for good. But will getting rid of one Mandragora mean that the creatures will stay away from East End for good? Or is this only the beginning of an impending assault on the small town by Asgard’s king?

Elsewhere on Witches of East End, Freya asks Dash to help save Ingrid, while Wendy becomes wary of where Frederick’s loyalties lie.

Where will Joanna and Alex track the Mandragora to? Will Dash’s new powers help locate Ingrid? Should Wendy continue doubting whether Frederick is truly loyal to their family?